A night of Catholic idolatry in Cuzco

As I drove my rented car down another street in Cuzco that was blocked by the Catholic festival of idolatry I happened to see an older lady arguing with another lady in the midst of the procession.  I couldn't hear what the argument was about but the Catholics were pretty upset.  My guess was the older lady was denouncing their idolatry.  As the intensity increased, another lady came up with a bottle of water and dumped it all over the older lady.  The crowd of idol worshiping Catholics broke out in laughter.

Processions of idols are so common in Cuzco that I see them almost weekly.  In combination with the fiestas that they have, which gives the Catholics an excuse to get drunk, there is always something blocking the roads around here.

We happened to be downtown last night and ran into a very disturbing showcase of idolatry with 1000's of people in the main plaza watching the procession of the señores de los temblores.  Which is basically the lords of the earthquakes.  They normally celebrate this around Easter so I´m guessing this was another tribute to the same idol.  These processions are blasphemous affairs of the demonic syncretism of the Roman Catholic religion and the ancient Inca beliefs. 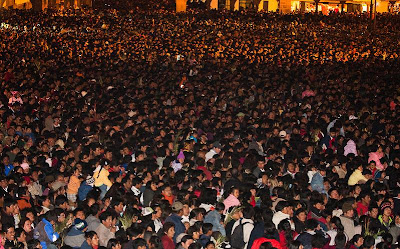 Ever since 1,650, when the ridiculous claim that an oil painting of Christ on the Cross held off a devastating earthquake that was rattling the city of Cuzco, the locals have been rendering homage to the image of Taitacha Temblores, the Lord of the Earthquakes. This celebration allows onlookers to get a glimpse of the fusion of Andean religions and Roman Catholicism.

The Cuzco Cathedral, where the image is kept, is built on the foundations of the ancient temple dedicated to the pagan god Apulla Tikse Wiracocha. The image of the Lord of Eathquakes is carried in a procession through the streets of the city just as the Incas used to parade the mummies of their chieftains, high priests and supreme rulers. In the end, the dominating part of the celebration involves the ñucchu flower (salvia esplendes), used as an offering to the ancient gods Kon and Wiracocha.  This is rather amusing because an image that can stop an earthquake can´t even walk but must be carried.

So has we are getting a cup of coffee, Emmy comes up to me and ask why they are worshiping statues.  Emmy is memorizing the 10 commandments and she just finished memorizing the 2nd commandment in it´s entirety, which states:

"You shall not make for yourself a carved image, or any likeness of anything that is in heaven above, or that is in the earth beneath, or that is in the water under the earth. 5 You shall not bow down to them or serve them, for I the Lord your God am a jealous God, visiting the iniquity of the fathers on the children to the third and the fourth generation of those who hate me, 6 but showing steadfast love to thousands of those who love me and keep my commandments."

Emmy had a great question, why do Catholics worship idols?  The answer is simply because they are not Christians.  Later, after watching this ridiculous display for a while, Emmy came up to me again, saddened, and said, "I wish Adam and Eve didn't sin."  It was a great opportunity to explain the gospel to her again.

I was also interested to see how our 13 year old, Raegan, viewed this event.  I saw that she wrote the following in her journal when we got home last night:

"The other day my family and I went to downtown Cuzco, which is filled with Catholic churches and people.  At the moment they seemed to be having a huge festival.  They had huge statues of Mary and Jesus on the cross and elderly people with cloaks on.  Many idols were present and lots of partying.  I felt so sad for the people.  They didn't realize how evil it was.  Leviticus 19:4 says, 'Do not turn to idols or make for yourselves any gods of cast metal:  I am the Lord your God.'  I pray one day they will see the truth.  That they will put down their idols and pick up the Word of God."

Raegan is right and she had a wise understanding of the event.  In 1 Chronicles 16 we read a song of David.  In verse 26 he says that, "For all the gods of the peoples are worthless idols." The Hebrew word, אֱלִיל , for "idol" means something that is worthless, nothing, empty, or vain.  This means that the "gods" had no existence, they were creations of the imagination.  What we saw last night was the inventions of a depraved mind.  Although, there was some help.  The Septuagint (The Greek translation of the Old Testament)  translates the word "idol" in this verse as "demon."  This means that behind every idol, there are demons.  The worship of anything in the heavens, earth or the sea besides the true God, is not only idolatry but it is demonic worship.  This is what we saw last night and this is what we see on a regular basis in Cuzco.

Posted by Scott Doherty at 8:04 AM

It is great to see how God is working through your family in Cuzco and Puru. I have some missionary friends in Guatemala who have similar experiences. Keep up the good work, we will be praying for you.