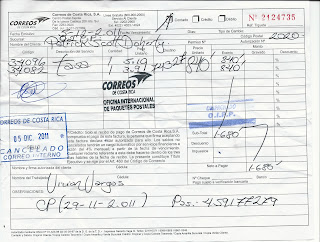 I spent over an hour at the post office in Zapote, Costa Rica simply trying to get two care packages that were mailed.  Here is a fine example of how things are done in Costa Rica.  It went like this:

1.  Walk to the post office with my friend Joe who is fluent in Spanish.
2.  Show passport to the guard who stamped my papers that said I had a package waiting.
3.  Wait in line #3 until it was my turn.  Give the slip to the guy; show passport again; sit down and wait for line #1
4.  Wait for 20 minutes for my name to be called, talked with a German who spoke broken English.
5.  Name is called, go to line #1, sign two papers and write down my passport number.
6.  The boxes were then opened and looked through.  Food was found and a glorious bag of Starbucks French roast coffee (2.5 lbs)
7.  This was not acceptable because of the new rule that food is not allowed in the country without special paperwork.  They have been nabbing people for smuggling chocolate into the country lately, you know, because it is so dangerous.
8.  Man tells us that we are to go to downtown San Jose and explain our situation and get a permission slip.
9.  This isn't going to happen with us so Joe elegantly talks with the guys and tells them our story, not quite sobbing but it got the point across.
10.  Guy at line #1 calls his boss over.  Joe gives the same story.  They fell bad and decide that the rules can slide this time.  After all, we are not smuggling bombs into the country, only candy and coffee.
11.  Our boxes are taken away and we fill out more paper work.
12.  Go to the bank in the post office with a slip of paper we were given and pay 7 cents for something.
13.  Bring it back to line #1.  Guy gives us more paper work for line #2.
14.  Go to line #2 and pay 3 dollars.
15.  Wait for my name to be called again for line #1.
16.  Name is called.  Go to line #1 and fill out more paper work and show passport.
17.  Finally given our 2 boxes after 1 1/2 hours.

Now that is efficiency.  So for all our friends in the States, think about this the next time you complain about waiting in line at the post office.

I have no idea why these packages got stopped and others did not but for future care packages, we were told that when filling out the customs slip, don't put specific foods.  Just put something more vague.  This whole process, however, was so worth the great care packages.  Thank you so much.
Posted by Scott Doherty at 4:39 PM

The things missionaries goes through, but it's all worth it :). God bless you!

A taste of Peru. Sometimes I think they just like to do these things to us for fun.

And the fact that you usually actually recieve the packages is also a blessing- ... some places in the world- nothing gets through the mail.

I'm posted in Honduras and had the same type thing trying to get my driver's license in Tegucigalpa. It took nearly 2 1/2 weeks and multiple lines. I was told to bring paperwork in triplicate and then they didn't look at it. They copied my passport number wrong, and wrote on a paper that I was from California--it seems they got this nugget right off my NC driver's license. Then under gender they put M-- and they didn't mean mujer. It took forever to get it straightened out, but I'm glad I can drive now!