I heard about a big Catholic church a mile or so from my house so Killillay and I walked down there tonight to give out tracts and share the gospel.  It was a very large church but not as rich or important as the big one that we went to in downtown San Jose.  The church downtown had relics that were displayed with all their other statutes.  This church had no relics but boasted of three full body idols of Maria.

Along with the three giant statues of Maria with spotlights on them there was a statue of a dead, limp, powerless Jesus still dead on a cross and another of a little, tiny baby Jesus with no power or glory in the arms of the exalted Maria.  The baby Jesus was weak and fully depended on his exalted mother. 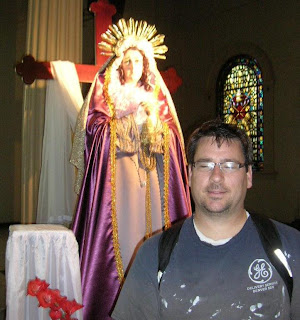 If  you know anything of the Vatican's theology then  you will know why this is set up this way at all Catholic churches.

The official worship of Mary started in 431 AD and prayers to Mary were started in about 600 AD.  Mary is worshiped by Catholics as God.  Some cathedrals have a statue of Mary at the top with God the Father and Jesus below her and offering their crowns to Mary.  People kiss her image, her stature, her picture.  People pray to her continually using the rosary.  Mary is believed to hold the sovereign authority of God.

Catholics believe that as the Queen of Heaven she posses the right to the whole kingdom of her Son.  She can dispense anything in the kingdom to whom she wants.  There are just as many creatures serving Mary as there are serving God.  Mary has dominion and power over all creation.  Jesus is King of justice but Mary is queen of mercy.  Basically they are saying that it is hard to get mercy out of Jesus so you must go to Mary, who will get the mercy from Jesus because apparently Jesus can't resist His mother.  Mary determines who gets mercy, who God saves, and who is helped.

Question:  Did God will to make our redemption and all its consequences depend on the free consent of the blessed virgin Mary?

Answer:  God willed that our redemption and all its consequences should depend on the free consent of the blessed virgin Mary. 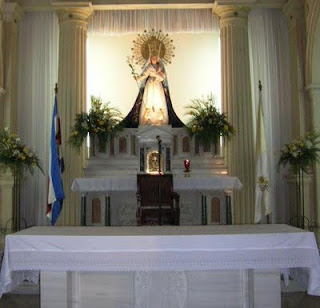 This is blasphemy against the nature of God and the character of Christ our compassionate Savior.

So in short, this is why every Catholic church exalts idols of Mary and even saints far greater than the Savior Jesus Christ.

You can read all about the heretical views that the Catholic church holds about Mary at the Vaticans web site here.

So anyway, Killillay and I gave out a whole bunch of tracts at the church and I shared the gospel with a guy who said he had no conscience, was guilty before God and was going to Hell.  He did not want to hear about his only chance of escape through Jesus Christ because he hated Jesus.  People in general were very acceptive of the tracts and they all read them right away.

Though the fields are ripe for the harvest and there are so few laborers we are confident and hope in Christ our Savior that He will gather His bride from every tribe, tongue and nation by His power alone and for His glory.

Posted by Scott Doherty at 6:50 PM