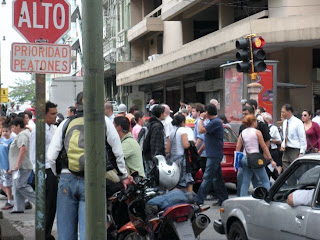 In an attempt to figure out how the bus system in this city works, Killillay and I jumped on a bus to see where it went.  There are five different private bus companies in Costa Rica.  As far as I understand there is one company that just goes around San José, another goes from a central hub area downtown to the outlying areas like where we live in San Fransico de Dos Ríos, another company called the Períferica goes on loop routes around the city and outlying areas, another goes from San José to other cities in Costa Rica and the last bus company goes to Nicaragua and Panama.

Killillay and I took one that ended up in downtown San José.  It is a very busy part of town with so many people everywhere.  It would be a perfect place to preach if we knew the language good enough.  It is also a place where there is much sin and general wickedness.  Prostitution is legal in Costa Rica and there is a huge problem with child sex trafficing.  Sadly, many Americans come here to find 12 year old boys and girls.  This is the definition of depravity and shows a hint of how wicked the human heart is.

On the way back, Killillay and I took a taxi and I had the privilege of sharing the gospel with our Catholic driver.  We had a good conversation, my Spanish is improving but I couldn´t argue with the guy when he said things that were wrong because I don´t know the language well enough.  Killillay and I also went to a few of the big Catholic churches downtown and witnessed many people in bondage to the system. 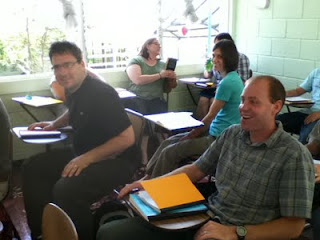 Our Spanish classes are going good and we have 4 hours of classes a day and about an hour of homework so we study for 5 hours a day and then we are in the culture communicating with people and actually using what we learn.  This is very helpful.

Kim and the kids are adjusting well and they have made a nice home for us here.  They also seem to catch some strange animal or bug every week.  They have caught geckos, some weird black worm looking thing, and a giant beetle that was as big as a coffee cup in length and girth.

We are learning a lot of other things as well that are not related to Spanish.  Every day we realize more that God is utterly sustaining us in every way, from protecting us from wicked men to upholding us in the Spiritual battles we go through here to holding our family together.  All the glory can only go to our merciful God.  Gloria a Dios.  We thank God for allowing us this privilege and we thank you for being obedient to God in holding the rope for us in prayer and support.  Muchas Gracias.
Posted by Scott Doherty at 7:17 PM

The depth of human depravity - the glory of our holy God - they are an eternity apart. Glory, what grace - what a Savior!