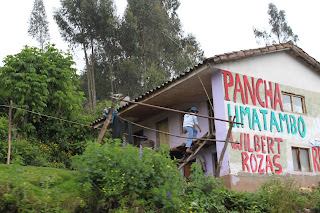 The Peruvian general election of 2011 takes place on April 10, 2011. Should no candidate receive more than half of all valid votes, a second round is necessary to determine the winner. This second round will be held on June 5, 2011, as no candidate is expected to get the necessary votes to win in the first round. The election will determine the successor of Alan Garcia, as well as 130 members of the Peruvian Congress and 5 members of the Andean Parliament. The winners will be sworn in on July 28, 2011. The winner of this election will become the 94th President of Peru and will govern the country for the next five years.

Now we know that our God is Sovereign and that He appoints and brings down leaders so we are not worried in any way that this is out of God’s control.  We trust in God fully to prepare the way for us, no matter what the Peruvian government is, even communist.  The communist Ollanta Humala is leading the polls now and if elected, could possibly change things in for us.  He may kick all the missionaries out of the country because of his party’s ideology.  However, if God is calling us, we will go.  We will just have to find more creative ways to enter the country.  Here are the leading candidates in ’s upcoming 2011 Presidential elections.

1) Alejandro Toledo: He was ’s president from 2001 to 2006 and was first Peruvian president of native Indian (Quechua) heritage, but his politics were free-market oriented. He left office to rather low approval ratings, due to the fact that many felt the macro-economic gains that were made did not extend to all Peruvians. On the other hand, nothing bad or particularly controversial happened during his tenure, which was a welcome change from the late 20th century. He’s considered a strong candidate in the upcoming elections.

2) Lucho Castañeda: He was mayor of (home to about 30% of ’s population) from 2003 to 2010 and enjoyed generally good approval ratings, easily winning re-election. He implemented the Metropolitano bus system in , which has to be regarded as a great success – although it’s only a small first step in ’s transportation solution. He’s divorced and conventional wisdom says he has little chance of becoming president without a first lady.

3) Ollanta Humala: He’s the villain of them all, widely painted by his opponents as a “leftist” of the same mold of Evo Morales and Hugo Chavez. Humala narrowly lost the 2006 Presidential elections. He seems to have moderated his stance on some issues like foreign investment, but he remains a controversial figure. His opponents and the establishment in general paint a sad picture of Peru heading for the same abyss as Bolivia under Evo Morales should Ollanta Humala be elected, ignoring the fact that Bolivia has one of the fastest growing economies in Latin America and Evo enjoys high approval ratings.

4) Keiko Fujimori: She’s the daughter of former Peruvian president Alberto Fujimori. Her father was president from 1990 to 2000, when he was driven out of the country by a popular revolution. During Alberto Fujimori’s regime, saw an end to terrorism and the economic chaos of the 1980s, but his regime was also marked by human rights abuse and corruption, especially in later years. Keep in mind that has a very young population (partly due to the stability that was brought under Fujimori) and something like 20% of the voting public has no adult memory of Fujimori’s presidency. However, there has remained a strong “Fujimori” following and political party in , led now by his daughter Keiko.
The polls for April 4th are as follows:
25%     Ollanta Humala
20%     Alejandro Toledo
18%     Keiko Fujimori

16%     Pedro Pablo Kuczynski
11%     Lucho Castañeda
Ollanta Humala, the communist, is the most feared to win.  The Peruvian Times is saying this about him:

Under Humala, a far-left rabidly anti-Chilean, airports, ports and telecom, energy, probably banks, newspapers and TV would be nationalized, according to his written manifesto.
Humala refuses to answer questions about his published Chavez-like program. the familiar, dreaded  paraphernalia of up-the-workers cant.   His brother Ulysses has created a stir by going public with a description of him as a little-Hitler dictator.  Another brother, Antauro, a cashiered army major, has been in jail the last six years  for leading a paramilitary gang in an attack, which Antauro says Ollanta planned, on a provincial police station that killed four unarmed policemen.

I don't know what God has planned but we are trusting in Him.  If Humala gets elected, we may have to find more creative ways to get into and remain in the country.
Posted by Scott Doherty at 6:46 PM