This report came from Boston.com

LIMA, Peru—This resource-rich, corruption-bedeviled Andean nation is notorious for its volatile politics. Even so, Sunday's presidential election is shaping up to be the most unpredictable in decades.

Favored to win the most votes is Ollanta Humala, a leftist former army officer who has spooked foreign investors by promising greater state control over the economy and wealth redistribution to favor the poor.

He prevailed in the first round of the 2006 presidential election only to lose a runoff.

Though preferred by 28.1 percent of voters in the latest opinion poll, Humala is expected to fall far short of the simple majority needed to win outright and avoid a June runoff. Which makes the battle for second so crucial.

The latest poll, conducted Saturday by Ipsos-Apoyo, gives Fujimori 21.1 percent; Kuczynski, 19.9 percent; and Toledo, 16.8 percent. That put Fujimori and Kuczynski in a technical tie, given the poll's error margin of 1.6 percentage points.
Presidential votes in Peru have been little more than popularity contests since the 1980s, when established political parties saw their credibility dissolve. Even President Alan Garcia's governing APRA party is hobbling: It's not even running a presidential candidate.
Analysts say that the electorate is even more fragmented than it was in 2006, when Garcia beat Humala, 53 percent to 47 percent. The results were widely seen as a rebuff of leftist Venezuelan President Hugo Chavez, who had openly backed Humala.

Humala, 48, now eschews all association with Chavez. This time he has enlisted Brazilian advisers allied with that country's governing Worker's Party. And he has largely dispensed with his firebrand rhetoric, though it re-emerged in final rallies, where he promised "a great redistribution of wealth" and called on supporters -- who are strongest in Peru's dirt-poor central and southern highlands -- to be vigilant against fraud.

The uncertainty is excruciating for the candidates: About 25 percent of people who registered a preference in opinion polls said they could change their mind.

"And this process isn't over yet. It will probably end in the voting line," said Giovanna Penaflor, director of the Imasen polling firm. 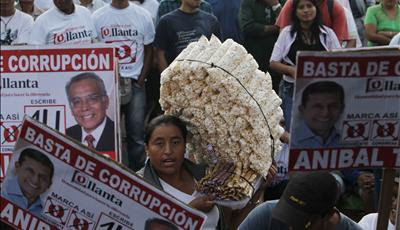 Humala rocketed into the lead in the campaign's final two weeks, promising free nursery school and public education for all, state-funded school breakfasts and lunches, a big boost in the minimum wage and pensions for all beginning at age 65.

Keiko Fujimori, 35, has made similar populist promises in this country of 30 million where one in three Peruvians lives on less than $3 a day and lacks running water.

But, unlike Humala, Fujimori is a free-market defender. While Humala says he would respect Peru's international treaties and contracts -- 60 percent of Peru's exports are from mining -- many Peruvians don't believe him.


Humala advocates rewriting the constitution, just as Chavez and his leftist allies in Bolivia and Ecuador have done, to make it easier to enact his agenda. He says he does not, however, seek to include re-election, as Chavez did to stay in office.

"We're not going to apply the Venezuelan model in Peru," Humala told foreign reporters Friday, saying he opposes placing the central bank under presidential control and artificially setting currency exchange rates.
Humala's radical change appeals to many in the lower classes, which in Peru is two out of every three people.

"Thirty-seven to 38 percent in the polls say they want a radical change in the economic model. And then another third broadly agrees with the status quo but wants greater redistribution," said Harvard political scientist Steven Levitsky.

The poor have barely benefited from economic growth that has averaged an impressive 7 percent over the past five years.

Humala's biggest draw may be his anti-corruption plank: He promises to give the public the right to fire elected officials at all levels. Last year, Peru was ranked 78th out of 178 countries in the global corruption index of Transparency International, tied with China, Greece, Colombia, Thailand, Lesotho and Serbia.
Keiko Fujimori has a rock-solid constituency that admires her father for defeating the Maoist-inspired Shining Path insurgency and taming hyperinflation during a decade in office. Alberto Fujimori is now serving a 25-year sentence for corruption and authorizing death squad killings.

Keiko Fujimori's campaign and congressional slate are jammed with her father's former Cabinet ministers and other loyalists. Foes complain that her father calls the shots from the police station where he is incarcerated and would be the eminence grise behind a Keiko presidency.

Mario Vargas Llosa, who lost the 1990 election to Alberto Fujimori, stepped back into the fray this week. Winner of the 2010 Nobel Prize in literature, Vargas Llosa has endorsed Toledo, saying a runoff pitting Humala against Keiko Fujimori would be "a true catastrophe."

Toledo, 65, squandered an early lead in the campaign, analysts say, by diluting his early message of greater economic justice, including a greater share of mining royalties for Peruvians. In the campaign's final days he shifted gears, saying "democracy is at risk" if Humala and Fujimori end up in a runoff.

Opinion polls show Toledo would easily defeat Humala in a second round while Kuczynski, 72, would lose against the "comandante." The reason has to do -- as does much in Peru -- with class and race: Toledo is indigenous by blood and was born into poverty.

Preferring to woo foreign investors, Garcia has been unable or unwilling to settle scores of social conflicts arising from environmental disputes of mining.

This week, at least three protesters were killed in clashes with police in a southern coastal region over a copper mine local farmers and fishermen fear would contaminate their water. On Friday, the government canceled the project.
Posted by Scott Doherty at 7:48 AM