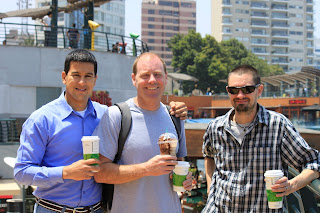 Walter took us to the airport and we got on an earlier flight. It was sad to say goodbye to our new and good friend. We had a very smooth flight to Lima and had no problems with our luggage except they ripped a big hole in my suitcase. We hung out for a while and then walked out to find Walter Isse. He found us right away and got us in a cab to go to his church. The name of Walter's church is Iglesia del Salvador, which is Heart Cry's main church in Lima, which Paul Washer founded. We dropped off our luggage and and talked about what areas we scouted and the work we planned to do. Walter told us all about the work that Heart Cry was doing and where. We talked about how to partner together. Walter is such a great man. He is originally from Argentina and came as a missionary to Peru. He speaks perfect Spanish and great English.
He took us all over Lima. We started down at the beach, which is the rich part of the city and is mostly American stores. It is like someone plucked an American city up from the roots and planted it in Peru. We didn't really like this part of town. After all that we have seen, this afluent part of town kind of disgusted us. We ran into some IMB missionaries that were college students. They told us all about the work they did in Lima this week and how many made a decision for Christ. This embarrassed us and we were disgusted. America is importing the same feel-good, watered-down, decisionalism that has destroyed the American church. We parted ways fast. We were actually ashamed to be from the same country.
We talked with Walter for a long time about everything and we found that we were so like-minded in absolutely everything. It was such a joy and privilege to find someone like Walter and Heart-Cry in this world. We talked about the problems in Peru and America and found so many things we do in America are embarrassing to Christ. The way we spend money and the way we live so selfishly without losing nothing for the gospel. The gospel has cost us nothing.
I shared the gospel in downtown Lima with a guy on the street in Spanish. Walter helped and then took over into a deep conversation with this man. The guy had a shirt on that said death to god but he said that he was not guilty of sin. Walter pounded him with the biblical gospel and then we parted ways. We went to the main plaza in front of the Presidents palace next. A guy came up to me and wanted to hear the gospel, or for some other reason I don't know, so I shared the gospel with him and Walter took over when I couldn't understand the man. The police came over and yelled at the guy but we told the Police that he was not bothering us but just talking but the Police told us to leave. We walked away with the man as Walter continued to share the gospel.
After this we went to a few places and saw more of Lima and then back to the church. We discussed the philosophy of missions and I told Walter about some of the things that the big missions agencies do and he was as disgusted as us. Some agencies require a family to raise $6000-7000 per month before they can leave for the field. Walter said that the President of Peru doesn't make half that much money. How much reforming do the church and missions need? We must get back to the Scriptures and hold them high! Once again, Matt had a hard time explaining his job as a Taxidermist so I had one last laugh. We thank God for His providence in letting us have the privilege to meet and possibly work with Walter in some way in the future for the glory of Christ and the Kingdom of God. Walter said he could help us get an apartment by his church when we spend 2 months in Lima while obtaining visas. We took a taxi back to the airport and once again experienced the traffic in Lima. There are actually 3 lanes but there are 6 lanes of cars. I would never drive in Lima. We got some dinner and met some more southern baptist “missionaries” which embarrassed us again. What in the world does the church think missionaries are to do? Spend thousands of dollars to take a team of “Christians” to the foreign mission field to play games and get people to pray a prayer through a VBS? Just venting. Matt and I are stewing a little.
Posted by Scott Doherty at 2:37 PM

I have to wonder if those other missionaries were sent to Peru not to evangelize but for God to show them some things about themselves and the Americanized gospel. When I read Revelation 3 about the church at Laodicea which thought it was rich and wealthy and in need of nothing, but Jesus said was really wretched and miserable, poor and blind and naked, I think of much of American Christianity.
Those other missionaries must have a desire to share the gospel and probably a love for God - but are part of a system that hasn't taught them about what it means to take up the cross and follow Jesus. I believe that God sent them to Peru more to teach them than to teach Peruvians.
My prayer for them is that God will spark something in their hearts about real, Biblical Christianity that will change them but also help them bring revival to Biblical Christianity to their own home churches.
May God keep us true to Him, and may we be diligent to run the race with endurance... In His love