Our trip started out good though, even before we left Montana.  Levi, our son, was working on a ranch for the day, shearing sheep so we had to pick him up when he was finished.  The ranch had a couple Peruvians working there and one of them could speak no English.  I really wanted to talk with this man.  His name was Pedro and he was a very nice man.  We conversed in Spanish better than I thought I would do.  I shared the whole gospel with him, which he responded well too.  He said he needed a Bible so Matt quickly called and ordered a MacArthur study bible in Spanish, which we will bring him when we get back.

When we finally got to the airport in Spokane to catch our first flight, we ran into a slight problems.  Because we are flying internationally, I needed to present the credit card that I purchased the tickets with to prove my identity.  The problem was that I didn't have this card because a few months ago someone stole it and I was issued a new card and number.  I knew this and called the airlines 2 months ago to insure there was no problem.  Well there was.  It took them 45 minutes to figure it out and they still didn't.  They supposedly credited my "non-existent" credit card and charged my new credit card another $7000.  We got on the plane and had a good but bumpy flight to Salt Lake.  Travel day #1 is about over.  We will sleep or hang out until our next flight at 1am. 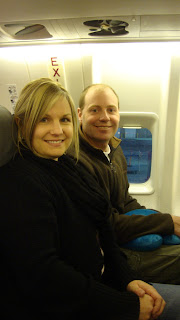 So excited to follow your progress! You are probably in ATL now and resting up before the next leg. Now that the bumps are out of the way I'm anticipating smooth travels for the remainder of your trip down. Anxious to hear about Lima and how you adapt to the Cusco elevation! Love you guys!

Praying for you guys!

Keeping you all in our prayers.