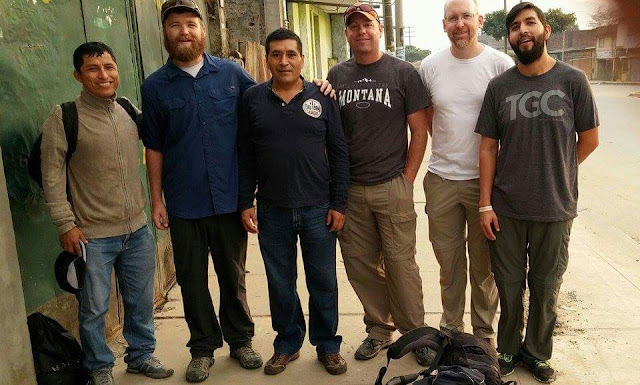 Another trip to the jungle was successful.  Mike Hyatt and Kyle Brown from Calvary Baptist church in Helena, Montana joined me on this trip to the village of Mayapo.  We flew to Lima and made our way to the church in Barranco to meet friends and pass the time getting a few supplies and eating our last good meal before we caught the night bus to Tarma.

In Lima we picked up our friend Ronaldo, who would translate for Mike.  Ronaldo is from Lima and is a very good translator.  We took a cab to the bus stop, which is in a very bad part of Lima, and we waited for our bus to arrive.  A guy selling dirty magazines, while proclaiming to be a Christian, took up a lot of our time while waiting.  We talked to him for a long time and we shared the gospel with him.  He loved to talk so I was suspicious of him being a distraction for someone to rob us.  We jumped on the bus at 9:30 and drove all night to Tarma.  The bus stopped once in the middle of the night for a bathroom break and it almost left with Ronaldo still in the bathroom.  A lady yelled at the bus driver to stop, and Ronaldo made a mad dash to the bus as it was leaving.  The bus travels from Lima at sea level, ascends to one of the highest drivable passes in the world at 14,500 feet above sea level, and then back down to about 800 feet above sea level in Satipo.

We arrived in Tarma at about 5:00am and found two Moto taxis, which we overloaded with gear to drive us to our hotel.  We checked in and tried to sleep, but a hotel worker awakened us at 9:00am to tell us it was time for breakfast.  We ate bread and eggs with bologna in it, and drank bad coffee and pineapple juice.

We met with Pastor Carlos at the little church at 3:00pm.  The little church in Tarma is suffering.  All the “churches” in town got together to form an alliance against the little church, calling it a cult.  The members are shunned and harassed in the little town.  They said they are very alone and long for fellowship.  They were very grateful that we came and wanted us to teach for 4 hours that day.  We gave Carlos some books from the Gospel Coalition, for which he was so happy.  Mike preached first on the nine marks of a healthy church, and then we had a question and answer time, which went very well. 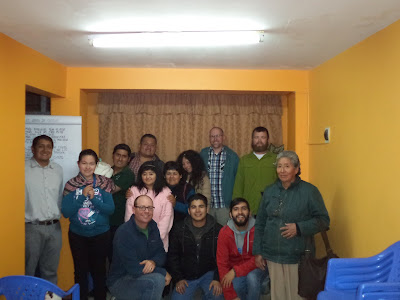 We took a coffee break at 5:00pm and then continued again at 7:00pm.  I taught on the mission of the church and what a healthy church member should seek.  We again had a time of questions and answers, which went on for over an hour.  There were a lot of questions about church discipline, unqualified pastors, persecution, and various others.  Before we left we prayed over a young couple with two little babies.  It is so great to be with Christians that are hungry for the Word of God.

We left Tarma early the next morning.  We contracted a car to drive us to the jungle city of Pichanacki.  The trip went by fast as we descended from the Sierras to the jungle.  We arrived in three hours and met up with Pastor Roric and Freddy.  We had a good lunch with them, gave them some books, and then headed to Satipo in another car.  Roric is a very solid brother who is well educated and has one of the most biblical churches in this area of Peru.  He decided to join us on our trip to the villages and would meet us the next day in Satipo.

We arrived to Satipo in an hour, checked into our hotel, and rested for a bit.  Pastor Miguel soon came to the hotel to tell us the change in plans.  A man always has his own ideas and plans, but God often changes them for His perfect plan.  Wilder, the pastor of the church in Nazaret, said we couldn’t hike the 20 kilometers to his village because a storm destroyed the trail.  He did arrange for all the teachings to be done in the village of Mayapo, on the Tambo River.  This was God’s providence because we have wanted to teach in Mayapo for years, but they were against us doing so.  Now the door was wide open.  Wilder even invited other Ashaninkas from other villages, so now there should be three villages represented.  This turn of events reminded of Paul’s call to Macedonia.  Acts 16:6-10 tells us:

“And they went through the region of Phrygia and Galatia, having been forbidden by the Holy Spirit to speak the word in Asia. 7 And when they had come up to Mysia, they attempted to go into Bithynia, but the Spirit of Jesus did not allow them. 8 So, passing by Mysia, they went down to Troas. 9 And a vision appeared to Paul in the night: a man of Macedonia was standing there, urging him and saying, “Come over to Macedonia and help us.” 10 And when Paul had seen the vision, immediately we sought to go on into Macedonia, concluding that God had called us to preach the gospel to them.”

God had a different plan for Paul, and for us as well on our trip.  We were very excited to see what was about to unfold for us.

Mike preached very well at Miguel’s church that night.  We had good fellowship with the brothers and then went to Miguel’s house for the first of many bowls of hot soup we would eat over the next week.  We talked until late and then went to bed.

The next morning we met Roric and Ivan (A young man from Miguel’s church who decided to go with us).  The power went out in Satipo early in the morning, which prevented our ride from showing up.  Miguel went and found a truck to take the seven of us.  We piled in the truck and drove to Puerto Ocopa in 1½ hours.  Puerto Ocopa is a dumpy river town that resembles a toilet more than a town.  We ate at a shady “restaurant” before getting on the boat.  Kyle and I chose a dish called Lomo Saltado, while the rest of the crew was inclined to eat jungle rat.  It seemed like a bizarre world as we ate strange food in a strange town as we watched an episode of Bonanza in Spanish that was playing on TV. 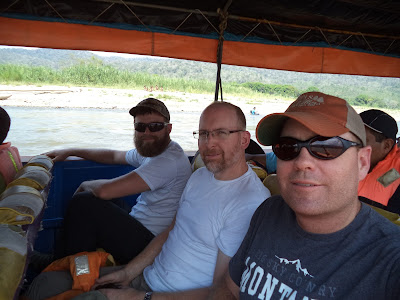 With our bellies full, which is not a good thing before a 5 hour boat ride with no bathroom, we boarded our vessel.  The boat was filled with over 50 people and an innumerable amount of cargo.  The seats went from gunnel to gunnel, so to get in your seat you had to walk a thin rail on either side of the boat.  It is hard to do this balancing act while holding gear, so some people opt to have their gear passed from person to person.  We had a good laugh at Kyle when a baby was being passed from the bow to the stern.  Ronaldo took the kid and turned to hand it to Kyle, saying, “Take the baby.  You must take the baby.”  Now Kyle had it in his mind that he would be responsible for taking care of the baby for the next five hours, so he told Ronaldo to take care of the baby himself.  After further explanation, I told him to pass the baby back behind him.  We all laughed.

We stopped at a military checkpoint, which is the last form of law for the next 1000 miles of jungle.  The military man checked the names on the list and found there were more people in the boat than names on the list.  This started a long inspection of each person.  Mike used his passport to buy his passage, but then put it in his backpack, which was now at the bottom of the innumerable cargo.  The man came to us and asked Mike for his passport.  Mike gave him his temporary Montana drivers license, which meant nothing to the Peruvian military man.  With some careful talking, we talked the guy into letting us go.  Close call.

After about an hour down the river, the young, inexperienced pilot got the boat stuck on a shallow spot in the river.  After being unable to get the boat unstuck, he received many new nicknames from the passengers.  Several men jumped into the river and pushed the boat out to save the day.

At the next stop, to the dismay of all the current passengers, many new passengers squeezed on the boat.

One lady, balancing on the narrow bar, was carrying a small dog upside down, by its back legs.  As she passed over Kyle, we noticed she also had a full grown, live chicken under her shirt.

We had another good laugh as we continued down the river. 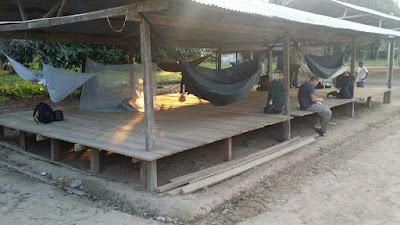 We arrived to Mayapo after five long hours.  We me the pastor of the church and Wilder, talked for a while, and then were escorted to our place of lodging.  It was a tin roof with an elevated wood floor, and no walls, which was perfect.  We hung our hammocks.  Before we went to sleep we gathered around the table in the dark and ate hot water with a few grains of oatmeal, crackers, boiled green bananas, and yucca.
Posted by Scott Doherty at 2:12 PM