Culture Lesson - The Weird, The Bizarre, The Baby Shower 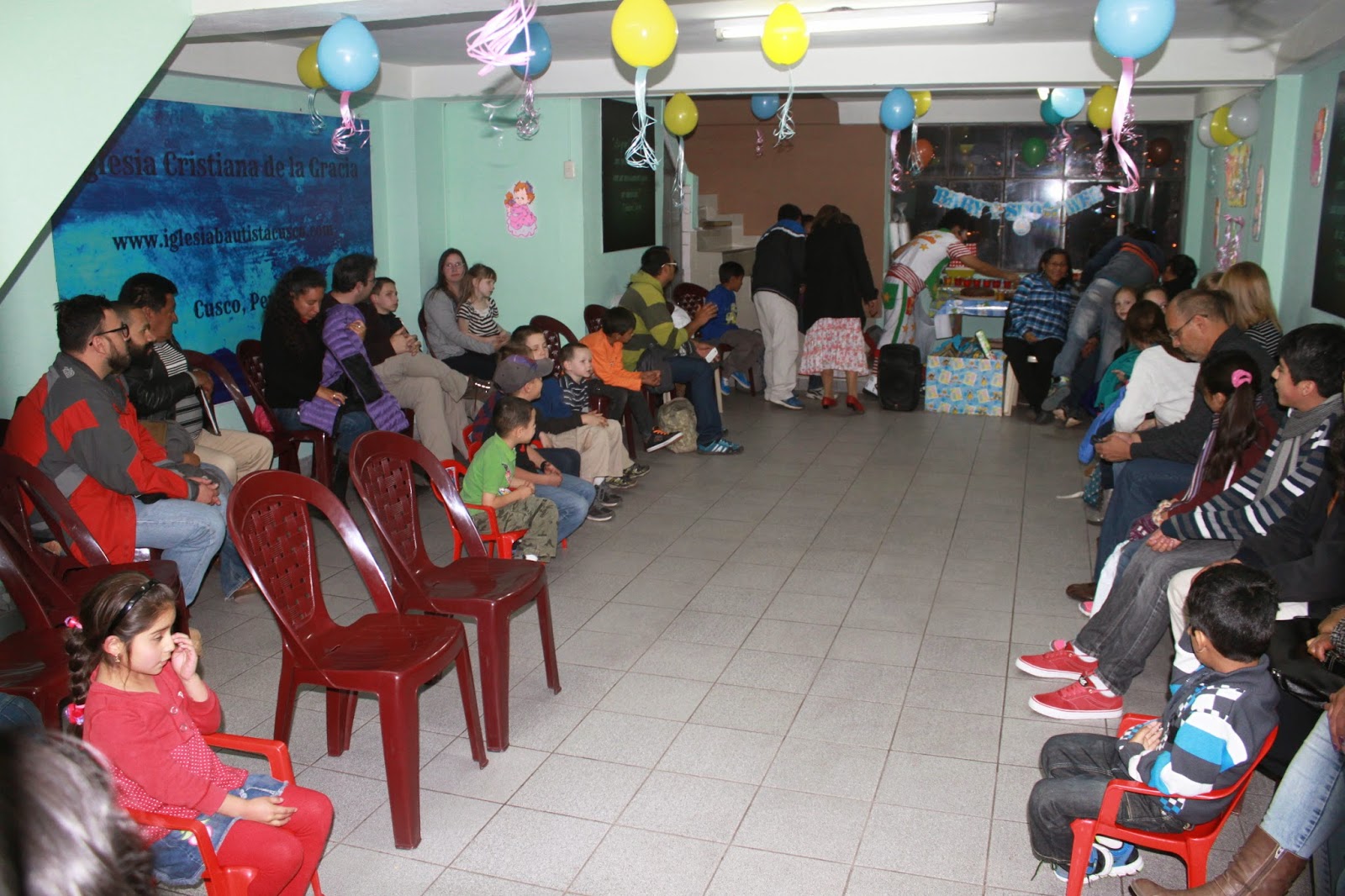 We had our first experience with a Peruvian baby shower yesterday.  People in Latin American celebrate a baby shower and they don't translate the name in Spanish.  They simply call it a Baby Shower.  Even though they took the tradition and name from English speaking countries, they definitely made it their own cultural tradition.  In the States, guys and children are not invited to a baby shower, which is a fantastic rule.  Peru, however, everyone is required to go.
The invitation said that we were invited to a baby shower at our church for one of the couples that are members of the church.  The invitation said it was to start at 5:00pm.  The following events will tell the tale of what progressed.
5:00pm.     There is no living human being in the church building.
6:00pm.     People begin to show up to the church building and continue to arrive until after 8:00pm.
6:15pm.     We begin singing hymns
6:25pm      Pastor Wehrner opens up in prayer.
6:30pm      Wherner preaches a short message on babies.
6:45pm      Lupe, Wehrners wife, begins leading us in games that they do at a children's birthday party.  The chairs are spread out against all four walls of the building so that we are all sitting in a big rectangle.  There is a lot of clapping, singing, and dancing.
7:00pm     The clown shows up.  Yes, I said, "the clown." 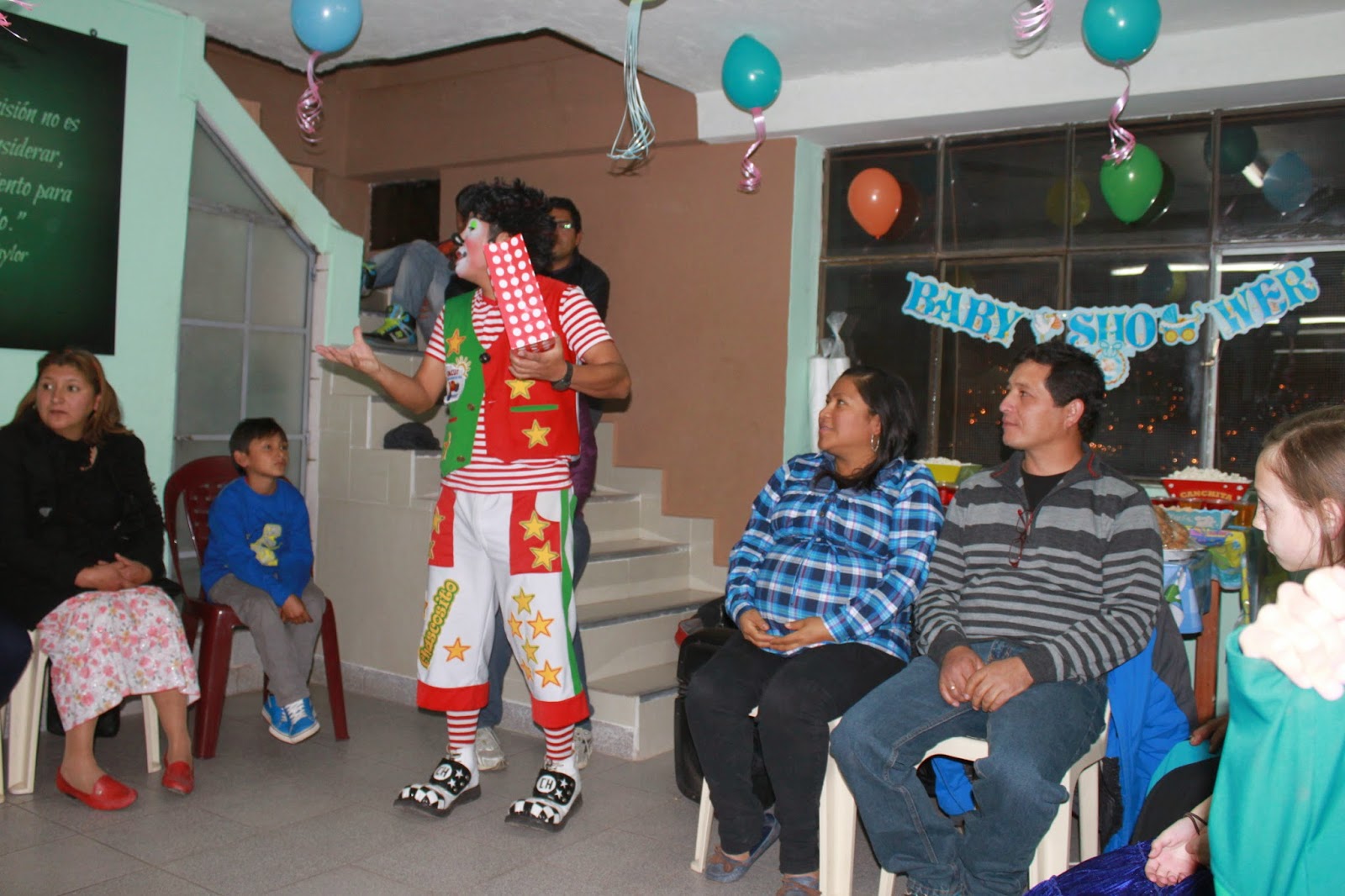 7:10pm     The clown begins his 1 1/2 hour act.  This is not a performance, but is mandatory audience participation.  The clown plays many games, and there is much singing, dancing, and magic tricks.  The clown makes people from the crowd participate in foolish games such as pretending they are a super hero rescuing a lady who is acting out her house burning down.  Other games included the parents of the baby putting diapers and bibs on two unsuspecting participant.  More singing, dancing, and embarrassing acts commenced. 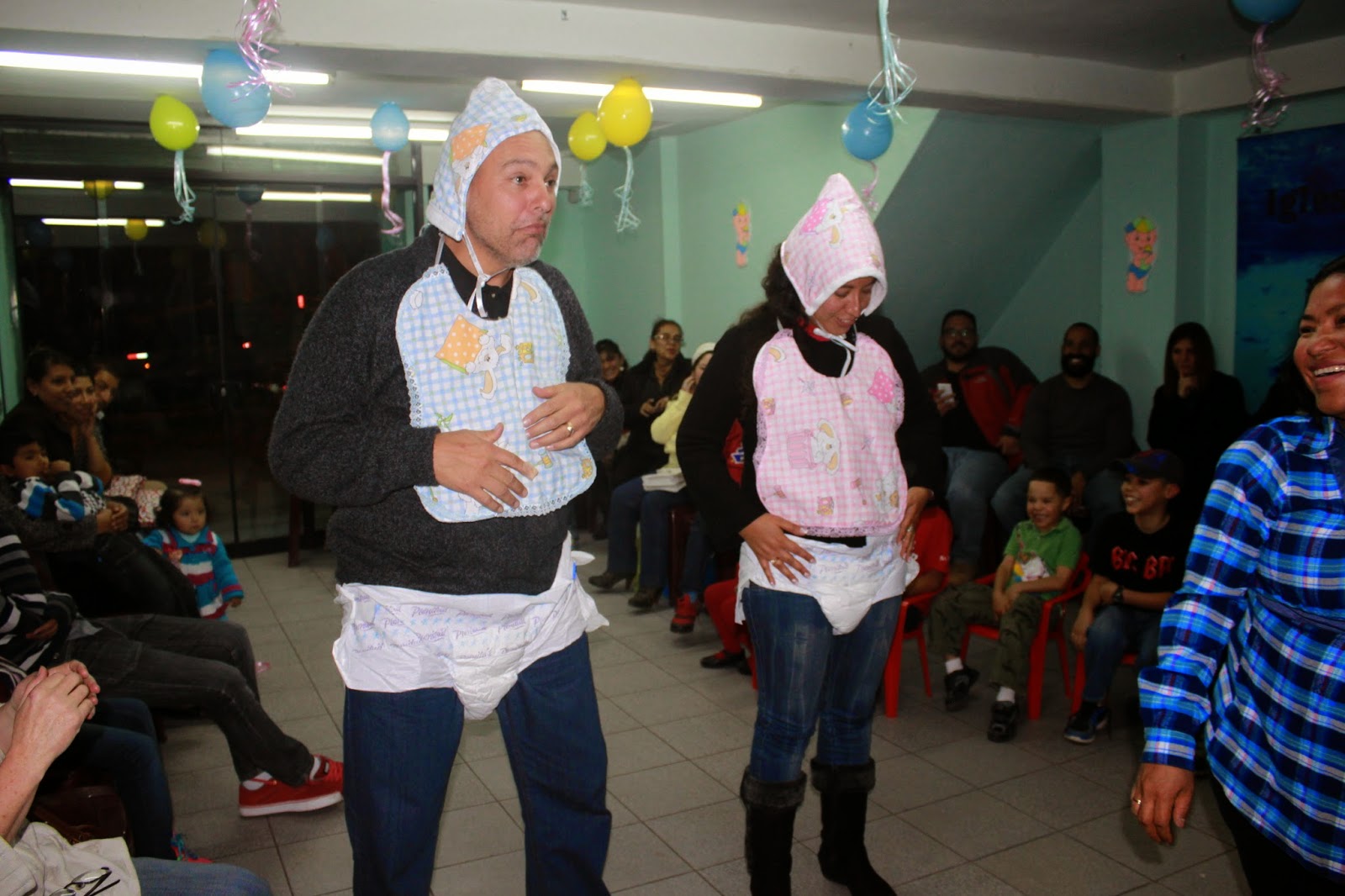 8:30pm     The clown pauses his act so Wehrner can pray over the food, which is then served to everyone the rectangle.  There were snacks, cake, popcorn, chicha morada, and various other finger foods.
9:00pm       The clown begins the second part of the act.  The couple having the baby are set in front of the box of gifts that were brought.  The couple must guess what is in the wrapped box, color included.  If they guess right they are rewarded with nothing.  If they guess wrong, they are punished by a willing participant in the crowd drawing on the face of the husband with a marker.  The husband's face was well plastered by the end of gift opening.
9:25pm      The clown thankfully closes his act and more food is served. Chicken and rice, sandwiches, cake, and other things.
9:40pm      Finally it is time to try and clean up a disastrous mess with people lingering and kids running wildly.
I have never been to a baby shower in the States, but I would guess that it is a whole lot different.

Wow, fun, but probably exhausting. I love how nobody shows up for an hour. That is what I was thinking it was probably like in South America. Do you start church on time over there?

We have trained the people to show up on time for the most part. We always start on time. A baby shower, however, is different

The clown thing really surprised me. Regarding the name, probably in Peru happened the same thing that happened in Costa Rica. It was used to call it: "Té de canastilla", but in the last years, people talk of baby showers...

Here also it is only for women