I would like to introduce you to the tribe that we work with in the Amazon.  The information below will give you a better idea of the culture and history of this people group.
The Ashaninka

The Ashaninka (also known as Kampa) are an indigenous ethnic group of people who live in Peru and in northwest Brazil (state of Acre). They speak a language belonging to the Aruak family. In 1993 there were 55,000 people in the group, and 869 of them lived in Acre. The Ashaninka have a long history of conflicts with other groups of people, from the Incas of the Inca empire, to the rubber collectors who came to western Brazil in the 1980s. The natives have been trying to resist the advancement of unlawful loggers in their territory up to these days.
Location
Among the 300,000 native people from 65 different ethnic groups in the Peruvian Amazon, the Asháninka are the second largest indigenous group, the Quechua being the largest. The Ashaninka communities are scattered throughout the central rainforests of Peru in the Provinces of Junin, Pasco, Huanuco, and a part of Ucayali, and the Province of Acre in Brazil. After Brazil and New Guinea, Peru is believed to have the highest number of uncontacted tribes in the world.
Name and language

The Ashaninka speak a language belonging to the Arawak family.  There are differences in dialects spoken by the tribe, but their culture is homogeneous. "Ashenika" is the name used by these people to identify themselves, which can be translated as "my relatives", "my people", "my nation". Throughout their history, the Ashaninka have been identified with names such as Ande, Anti, Chuncho, Pilcozone, Tamba, and Campari. They are best known as "Campa" or "Kampa", names used by anthropologists and missionaries to designate the Ashaninka exclusively, or the sub-Andean Aruak generically. Literacy rates range from 10% to 30% compared to 15% to 25% literacy for the second language, Spanish.


Subsistence
The Asháninka are mostly dependent on subsistence agriculture. They use the slash-and-burn method to clear lands and to plant yucca roots, sweet potato, corn, bananas, rice, coffee, cacao and sugar cane in biodiversity-friendly techniques. They live from hunting and fishing, primarily using bows and arrows or spears, as well as from collecting fruit and vegetables in the jungle.
History

The Asháninka are known historically to be fiercely independent, and were noted for their "bravery and independence" by the Spanish conquistadors. During the rubber boom (1839–1913), the Asháninka were enslaved by rubber tappers and an estimated 80% of the Asháninka population was killed. 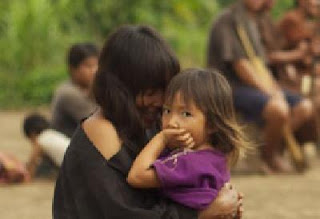 For over a century, there has been encroachment onto Asháninka land from rubber tappers, loggers, Maoist guerrillas, drug traffickers, colonisers, and oil companies. For much of their history, they resisted acculturation and outside influence. Since the 1950s, Asháninka territories have been reduced and their settlements have been systematically destroyed, resulting in a retreat by Asháninka people into the jungle. Some Asháninka fled to Brazil, and now a small community of 600 or so have land rights in the state of Acre. 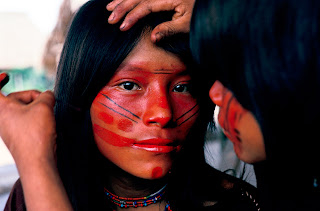 During the 1980s and 1990s, internal conflict in Peru caused massive displacement, disappearance, and death among the Asháninka communities located in the Ene, Tambo and Perene valleys in the Vilcabamba Mountain range. In this period Ashaninka chacres (garden plots) were burned, Asháninka legal papers were destroyed, some Asháninka were forced on pain of death to join the Shining Path, and others were enslaved. Many fled into the interior and others gathered in the thousands in small areas for protection. Because Asháninka communities are usually very small, this caused great disturbance. They could neither hunt nor fish effectively due to the danger posed by armed groups in the forest, thus malnutrition became increasingly threatening. According to the Truth and Reconciliation Commission, 10,000 Asháninka were displaced, 6,000 Asháninka died, and 5,000 Asháninka were taken captive by the Shining Path during this time, and thirty to forty Asháninka communities disappeared.
Malaria is on the rise in Asháninka communities due to logging and the illegal clearing of tracts of lands by loggers and colonists, as are other diseases bought in by "outsiders".
Current threats (either directly or indirectly) are from oil companies, drug traffickers, colonists, illegal lumberers, and illegal roads.
Posted by Scott Doherty at 1:54 PM