Another Hindrance Removed and Evangelism

God is good and merciful.  We continue to learn this all the time.  There is not nor can not ever be a hindrance to God.  Governments are never an obstacle to God and He turns them where He wills when He desires.

Our visas have been extended.  By the grace of God, we got submitted for approval without a paper that we needed. Either God blinded the people or they were disorganized in our favor but we do not have to leave the country. We should get our approval in 3 weeks and then the family makes the trip to Lima, stands in line all day and the kids receive their carnets. Then we will be safe for at least a year.

After Tim made a last minute trip to Lima, he is now in the same position as us.  God also did an amazing work with the Killillay's visa process and it looks like we will be here for another year.  We can only give God the glory for this because it was out of everyone's hands and we could have never been accepted in time if God never interceded.  Thank you for your prayers, God answered them.

On another subject, we hit the streets together as a church for the first time on Wednesday.  Wehrner, Joe and I hit the area of San Sebastian and gave out a lot of tracts and were able to share the gospel with quite a few people.  San Sebastian is a dark and difficult place because many of the people still hold to some of the superstitious beliefs of the Inca religion. 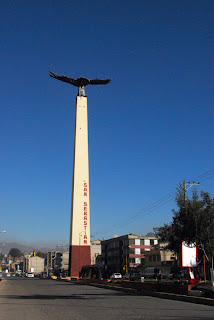 An example of their superstition and fear comes about 15 years ago.  The beginning of San Sebastian is marked by a giant idol of a condor on top of a big tower.  On night, a person claiming to be an Incan priest climbed to the top of the tower and sacrificed a baby to the condor idol.  The dead and mangled baby was found the next day but nothing was done about it because the people feared the Inca gods so much.

However, as we shared the gospel, it seemed people were quite open to it.  I did talk to some people that attended Charismatic churches. They could not tell me even one thing about what the gospel is.  I was doing a few tricks to a couple of police officers to break the ice and Wehrner finished witnessing to a Quechua lady and joined us.  He spoke to them for a long time and squelched all their arguments until they had to leave.

It was a good day.  A couple of men from Heart Cry are spending a week with us starting today.  They have all our "Biggest Question" DVDs and a couple thousand tracts for us.  They will be helping us with the church for the next week and we are excited to have them.  Please pray for February 14th, which is the day we will pass out 800 DVDs at the college campus.  We will pass out another 800 DVDs in a few months at the other university when it opens up again.
Posted by Scott Doherty at 9:41 AM