Semana Santa, or Holy Week, in Latin America is celebrated by the Catholic church in a much bigger way than in the US.  Semana Santa is the week before Easter and there are many processions throughout the week to reenact and celebrate Christ and the events leading up to His death and resurrection.  Doesn't sound too bad does it?

Well unfortunately Catholics add to these processions Mary and various dead saints.  People show up by the thousands to watch these processions but most people use the country mandated holiday to escape to the beaches and party.  There is a law in Costa Rica that alcohol can not be purchased on Thursday or Friday, so everyone buys as much alcohol as they can Monday through Wednesday and then they drink it all on Thursday and Friday.  Most people use this holiday as an excuse to party.

We started earlier this week in downtown San Jose.  My friend Brandon is in Costa Rica visiting us so we went downtown and shared the gospel and gave out tracts.  We stopped in a Catholic church so I could show Brandon the many strange and unbiblical traditions that Catholics practice, like burning candles that send prayers upward for a small fee, the many relics that are worshiped, purchasing of indulgences, the mass and the many statues of saints and Mary.  The Catholic church always has a statue of Mary in an exalted position usually holding her helpless baby Jesus.  Jesus is usually a baby or a limp, dead man on a cross.

I shared the gospel with 2 people in the church while we were there.  The conversation was all in Spanish, which went surprisingly well.   The girl was convicted but the guy kept insisting that he could pray to Mary.  This a common teaching in Catholicism; Jesus must do what His mother says because He respects and adores her so much, so the people pray for Mary to intercede for them to Jesus.  This is, of course, unbiblical.  There is only one intercessor between man and God and it is Jesus Christ. 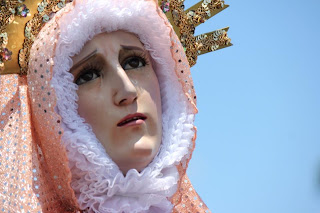 The big procession in Cartago was today (Friday) and a few of us went with one of the Elders from our church to share the biblical gospel by giving out gospel tracts and speaking with people one on one.  We talked to several people and were able to share the gospel with them as well as give out 100's of gospel tracts.  After talking with many people we found out that many people just show up to these processions out of tradition.  Just like we would show up to a 4th of July parade in the States.  For the most part the people were unaffected by what was going on in the procession.  Even some of the actors or drummers were laughing or playing on their cell phones during the procession.  The people have no problem watching this grand procession of Jesus going to the cross and then going home to eat and party with friends and family.  Things are not much different in the States as many professing Catholics spend Saturday at the bar and show up to mass on Sunday morning for traditions sake. 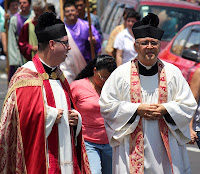 Overall it was a great day, we were privileged to share the gospel with several people and give out a lot of tracts, not to mention the great fellowship with like-minded brothers.

Posted by Scott Doherty at 9:50 PM

It is from Peru?