Costa Rica is very different than America but similar to many Latin American countries. A few funny things that we have noticed are:

The shower: The shower in our house is not connected to the hot water tank. Instead, it has a water heater built into the shower head. What powers the shower head is a couple wires at 240 volts. So you are standing in flowing and splashing water with 220 volts a few inches from your head. 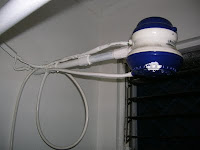 Man holes: So for some reason people steal the man hole covers around town. So you are walking around and there will be a big open man hole that if you are not paying attention you will drop about 5 feet into the sewer. They call them gringo traps and you can figure out why.

Street Addresses: There are none. I had to call and get internet and the way that you have to tell them how to get to your house is to say: Go to San Francisco de dos Rios then take a left at the school and follow the street to the green house with the tree in front that is not there anymore, then look behind the house and you will see a blue house and that is mine. That is my address.

Paying bills: Your bills (Electric, water, sewer, phone, internet, etc) sometimes come in the mail and sometimes they don't make it because there is no addresses which confuses the bill guys, who are not mail men but work for the company that is billing you. If they don't make it and you don't pay the bill then they shut off their service to you instantly. Many people get there water shut off without notice. If you get the bill then you go to the supermarket to pay all of your bills. You hand the bill to the clerk at the check out counter, he looks it up and tells you what you owe, you pay in colones and your bill is paid.
Posted by Scott Doherty at 6:05 AM

You must be settling into your blue house. We pray for you daily. We are doing well here. Please let us know if there is anything that you need. Good bless all you guys.

one thing about it, if your water is shut off you won't get electrocuted in the shower.Ha Ha

Rolos says they steal man hole covers for the steel. Don't know how much they make but I wonder if it is less than what the one who falls in has to pay to get well.
He also says they had a shower heater like that when they had free electricity at the ranch in Peru. It worked, but it ate electricity like crazy.

I heard they steal them for BBQ grills around here