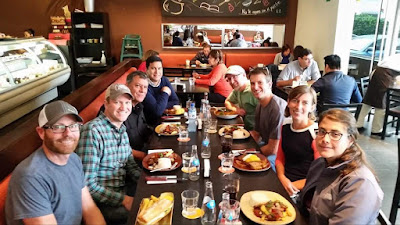 A group of five of us from Calvary Baptist here in Helena, MT met up with our friends Bryan and Brad from Mount Vernon Baptist of Atlanta in a small hostel in the center of Lima, Peru. I was in Cusco for a few days prior to visit our church. Everyone was doing very well. We were all together to teach for a week at another Reforming Peru conference in the jungle town of Pichanaki. We took the twelve hour night bus from Lima to Pichanaki, which involved starting on the coast, ascending a 14,500 foot mountain pass over the Andes, and then descending a lengthy stretch of switchbacks to the heat and humidity of the jungle.

We partner with a Peruvian brother named Roric, who is the pastor of a church in Pichanaki, which he planted about four years ago. Roric is amazingly sound in doctrine, understands the Ashaninca culture, and is one of the most capable and well-organized Peruvians we know.

After not sleeping much on the bus, we arrived Saturday morning and spent the day resting, preparing for the conference, and getting to know the town of Pichanaki. They happened to be having a coffee festival for all the coffee exporters in this area of the jungle. We drank coffee and ate chancho de palo (a whole pig roasted on a rack at the edge of a fire).

I preached at Roric’s church (Grace Bible Church) on Sunday morning, and then we discussed the conference details, cleaned the conference building (which was an old garage) and then ate dinner at the house of a brother named Abram. Abram turned out to be an animal lover of sorts. After dinner he brought out a little boa constrictor snake that he kept in a fanny pack. He threw it on the table for us all to play with. He then brought out a sloth, scarlet macaw, and finally a 25 year old boa constrictor that was quite large, maybe six feet. Some members of our party, especially one man, was not fond of snakes, in fact, he was turned out to be deathly afraid of them. As the snake came in, the fearless preacher ran out the back door, but a big dog that was guarding the door hindered his retreat. The whole scene was quit amusing and we all, well most of us, laughed about it for some time after.

Monday brought the first day of the conference. The Ashanincas, who traveled for one or two days from the villages, arrived on time. Each conference attendee received a book on 20 Christian Beliefs by Wayne Grudem, a notebook, and a Spanish Bible. We had about 25 people in attendance each day. 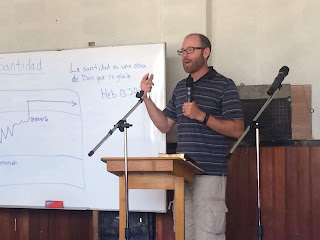 The conference teaching on the Local Church and Holiness seemed to be going well. At the end of each day, for the last two hours, we had a question and answer period where they could ask any question. The questions the first few days are usually not about the teaching from the day but come from what they have been struggling with for the months before the conference. For example, one question was this:

“A man and a woman are not married, but they have been living together for many years and have four children together. The woman becomes a Christian and wants to be baptized but she is still living in fornication because she is not married. She asked the father of their children, who is not a Christian, to marry her, but he refused to do it. Should the wife be baptized? Should she leave this man? Who should take care of the kids? Is she still living in sin if she stays with him for the sake of the kids?”

Quite a complicated situation, yet a very common one in Peru. 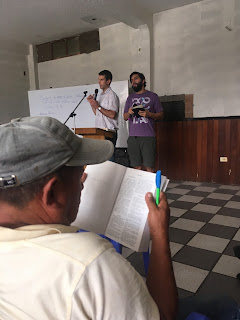 We continued teaching on the church and holiness on Tuesday and Wednesday. The question and answer time is always my favorite, and maybe the most useful to the Ashaninca leaders. The following questions are only a few of the many that were asked: 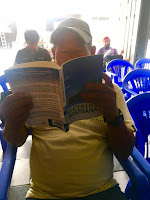 After hearing questions like “who are Adam and Eve?” we decided to adjust the teachings. We realized they did not understand so much of what we were teaching. Even though we have taught it many times over the last 4 years, we taught again on the gospel. The last two days we taught them what the gospel is by using four points to explain it: God, Man, Jesus, Response. The last few days were very interactive and they seemed to get it.

The conference ended well. We learned a lot about the Ashaninca and how we can better teach them the Scriptures. Roric will be going into the villages every month or so to re-teach what we taught at this conference. We were reminded again that only the Holy Spirit can make men understand the truth of the Scriptures, no matter how good it is explained. 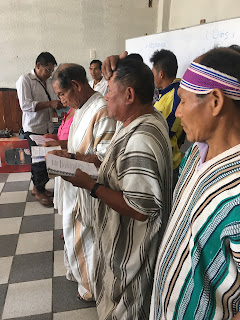 I know I was frustrated at the end of the third day because of their lack of understanding something we have been teaching them for years, but I was encouraged to press on, trust in God, keep teaching the truth, and beg God to enlighten their understanding. I was encouraged that we now have a conference where Ashaninca men and women will travel two days to listen to the word of God be taught for a week. Only a short time ago we were the first white men in these villages and we were not very welcome. God has done so much in a short period of time and we trust in Him to complete the good work that He started.
Posted by Scott Doherty at 9:22 AM