Before we went to sleep last night Miguel told us that it wouldn't rain because it was a new moon.  At 5:00am this morning the sky opened up and it rain so hard that it seemed a cloud burst.  Anthony and I woke up to rain pouring into our hammocks because of a leak in the thatch roof of the hut. We frantically put up tarps and went back to bed a little damp.
The morning dawned with a bright sun.  We cooked up some morning coffee, ate breakfast, and met up with Wilder (the guy from the far village of Nazaret) and his wife for the rest of the day.  Wilder started the village of Nazaret during the terrorist days when they had to escape deeper into the jungle for protection.  Wilder builds boats, huts, and plants crops to earn money.  He is also the pastor of the church in Nazaret.  Wilder and his wife taught us some of the Ashaninca language and songs.  A few are below:
Pasonki = Thank you,  Tasorentsi  =  God,   Jesoshi  =  Jesus,  Ishire Quirishito  =  Holy Spirit
Hymn - Impocaje Jesoshi Inquenapee Jenoqui
Impocaje Jesoshi, inquenapee Jenoqui (He comes, Jesus, again in the clouds.)
Aneavajeri impiaje Tasorentsi Itomi  (We persevere until the coming of the Son of God)
Aririca impoque, amenajeitauajeri (When He comes we will be with Him)
Aneavajeri impiaje Tasorentsi Itomi  (We persevere until the coming of the Son of God)
We waited and waited for the teachings to start but all was delayed as usual.  Every time we come to teach, there is some spiritual battle that tries to hinder us. This time he hindrance involved a witch hunt.
There were nine people in the village that became ill.  Naturally the tribal people assumed that there were witches in the village that were using witchcraft to make the people sick.  It was the job of the curandero (basically a witch that supposedly does good and heals people) to find out who the bad witch was.  The curandero of the village has more power and control than the president or jefe.  The curandero is like a medicine man that mixes plants together for different purposes.  To discover a witch, the curandero mixes a concoction of very strong hallucinogenic drugs so that he can take the drugs and see a vision of who the witch is.  This is very controversial because the curandero could just make something up and blame his enemy.

Many times when gringos come into a village and by coincidence someone dies or gets sick, the gringos get the blame for it.  It did cross our mind that the curandero might blame us.  The meeting went on all day until 6:00pm.  They kept the whole thing quiet, not wanting to talk to us about what was going on.  Apparently they found the witch and "kicked him out" of the village.  Wilder used this same phrase when he was telling us that they killed their wives for being witches.
When Dustin and Josh tried to use the "bathroom" last night, they discovered that there were big bats living in the hole.  When they tried to use the "toilet" the bats came flying out of the hole.  Let's just say there was not a little screaming as they shot out of the bathroom like they were shot from a canon.
To pass the time today, we investigated the bats and found, using a Go Pro camera, that there were as many as 40 big bats living in the toilet.  You could use the bathroom during the day because they wouldn't fly out into the daylight.  It was still a little freaky because you could hear them right below you.  Bats in a "toilet" does make using the bathroom in Chembo a bit of a challenge.  Anthony took a picture of one flying out of the hole. 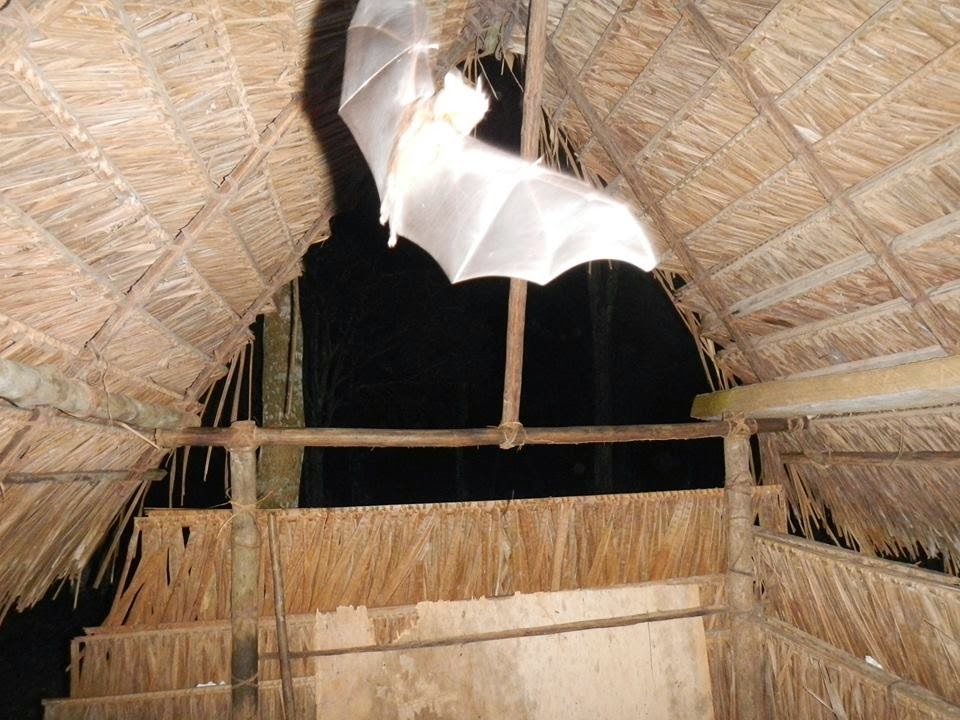 Finally we got the news that we could preach at the community center tonight at 7:00pm.  I preached about Elijah and the prophets of Baal on mount Carmel.  I challenged the people to quit fearing and serving other superstitions and other gods, and serve the only true and living God. I challenged a lot of their fears about the legends they have in the jungle.   It went very well.  Afterwards, over a cup of oatmeal water, Wilder told us many stories about his encounter with mermaids, Chuiachaci (a demon of the jungle), and many other strange things.  We went to sleep in our hammocks, protected from the many spiders, cockroaches, and bats.  Here are a few pictures of the spiders that sleep with us. 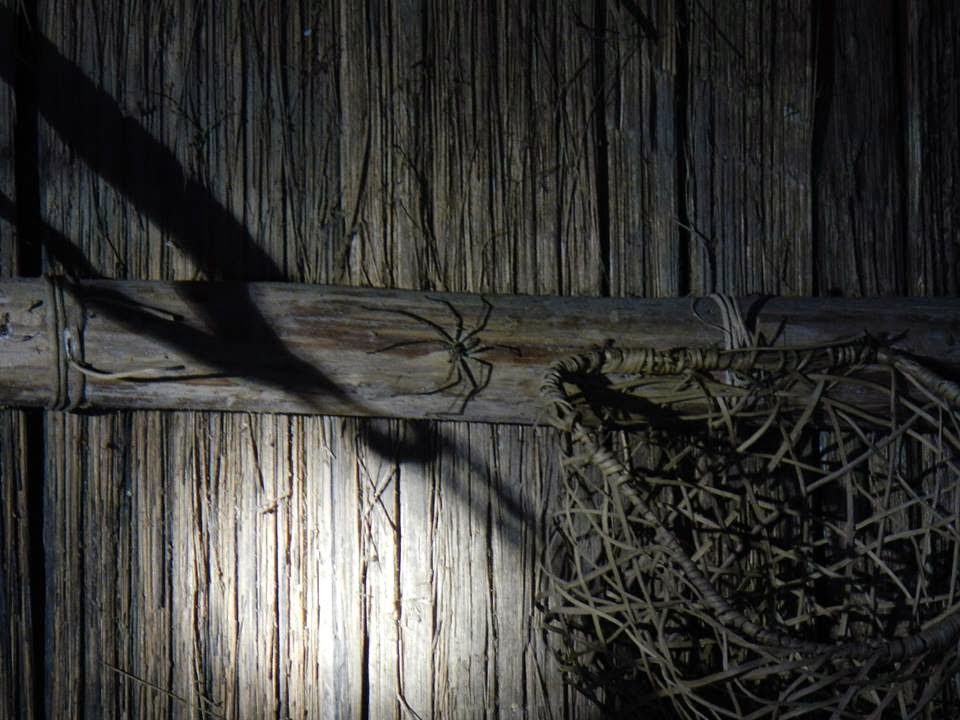 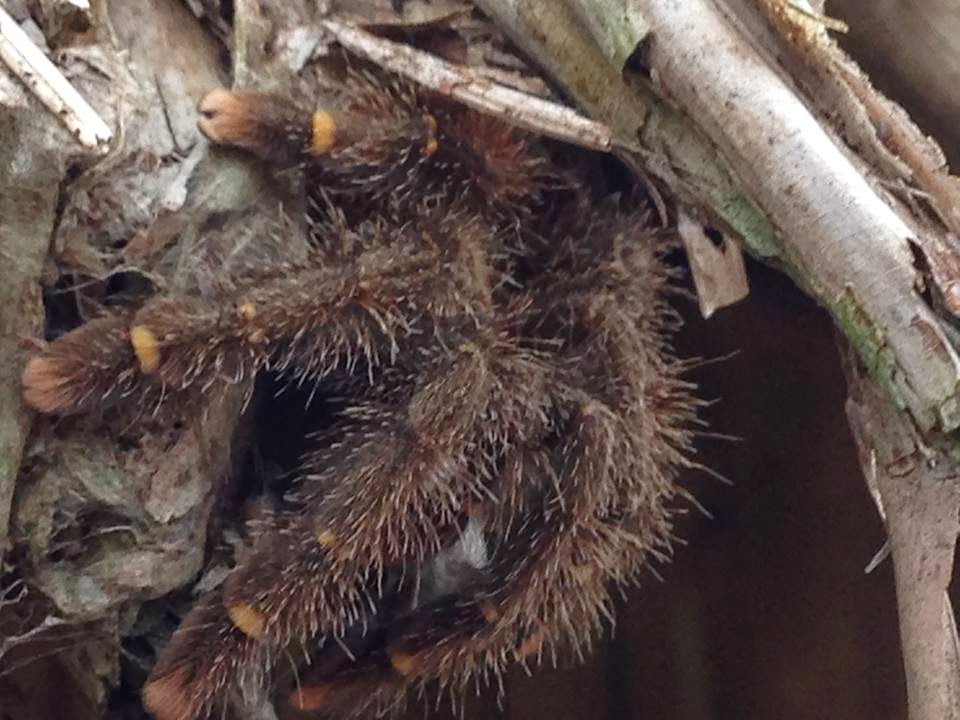