Death, Animism, and Witchcraft in the Peruvian Jungle

Us:  How many people are married?
Wilder (Jefe of village):  None (with embarrassed look)

Us:  How many people have more than one wife?
Wilder:  7 out of the 8 families in the village.

Us:  Are you still living with both wives?
Wilder:  No

Us:  Why?
Wilder:  They were witches.

Us:  What evidence is there that they are witches?
Wilder:  They tried to kill their babies.

Us:  How?
Wilder:  The babies got sick and that is the evidence that the wives were witches.

Us:  Where did they learn witchcraft?
Them:  From other villages.

Us:  Where are the seven wives now?
Wilder:  Dead

Us:  Why?
Wilder:  They were cast out of the village and then they died?

Us:  How did they die?
Wilder:  Suicide


This was the disturbing conversation we had with Wilder, the jefe of the village of Nazaret.  It was disappointing to find that they are still so steeped in animism and witchcraft.  We realized they had almost no understanding of the gospel.  They believe that if a baby gets sick (which is quite easy in the jungle) then it is the result of witchcraft.  The wife is instantly accused and killed.  They say they commit suicide but the conversation showed that there was a mystery behind what he was saying that he did not want me to know.
Animism and witchcraft is a major part of the jungle.  There is a brujo (male witch) in almost every village.  Why found out from talking to brothers in Mayapo that the witches cause them great problems but they said God is more powerful.  Another disturbing belief that the jungle people seem to hold very serious is the belief of Chullachaqui. 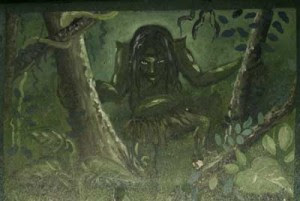 Chullachaqui is a devil of the Peruvian Amazon.  Basically they believe that Chullachaqui appears disguised as prey to hunters and tricks them deep in the jungle where they get lost forever. Some believe that the Chullachaqui takes the physical form of a family member or a loved one long not seen, and persuades his victim to follow him to unknown places in the jungle where they are led into traps or left at the edge of cliffs with no way out. Others say that he appears in the shape of a very short man dressed in rags waving his closed fists in the air looking for a fight. In this case, natives believe a man must accept his challenge and beat him until he uncovers all the richness he has hidden in the jungle. He who declines this challenge is cursed with the inability to hunt and foul luck: family and friends turn into enemies, wife leaves with another man, etc.
﻿
In some recent incarnations, the Chullachaqui is described as a bipedal creature, similar in appearance to an imp. In these cases, the creature is said to be aggressive and extremely lethal, and has, according to some tribes, killed a number of humans.  Chullachaqui is said to have an ability to turn into any animal of the rainforest. Chullachaqui is a kind of a forest spirit who guards the lands and the animals and punishes a man if he breaks a taboo or otherwise acts unwisely in the forest.

We heard about Chullachaqui when we were at Chembo and we were laughing about it as we walked to Nazaret.  When we got to Nazaret, the name of Chullachqui came up and Wilder said that he has seen him.  He says that he is the lord of all the birds in the jungle.  Wilder holds to this believe and has fear of him and pays him homage as the lord of animals.  We taught on God as the owner and creator of all things and the great Sovereign over all.  We taught them that anytime they fear and give homage to anything else besides God that it was idolatry.  I don't know how they took the teachings or how much sunk in.

Please pray for the destruction of the immense spiritual strongholds that keep these very remote people under slavery.  Only the gospel can break these strongholds.  The gospel is their greatest need.  Once again we arrive to the great needs and few laborers.  We need missionaries to go to these remote and dangerous place to reach and teach the Ashaninca people on a frequent basis.  Please pray, come, or hold the rope!

Posted by Scott Doherty at 6:37 AM

Though much of the modern world will scoff at the thought of witchcraft and spirits as mere fantasy, they are very real.
Continue to proclaim the glorious Gospel of the Lord Jesus, at Who's name every knee will bow!