Another example of Catholic syncretism and idolatry in Peru 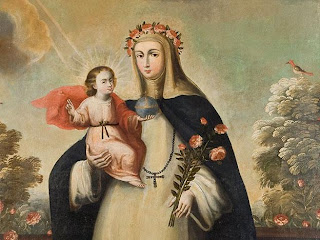 Eighty years ago, an image of Santa Rosa arrived in the indigenous community of El Wayku. Since then, the saint has become the patron of this traditional Chanca town, where the primary language is Quechua.
El Wayku is located in northeastern Peru, in Lamas province, 20 kilometers away from the city of Tarapoto. Every year, in the last days of August, El Wayku prepares itself for a festival to honor the local patron saint.
However, according the people of Wayku, the religious veneration of Santa Rosa hides an ancient tradition: the cult to a plant (now called Santa Rosa) that blooms this time of year, especially in higher altitudes where the temperatures are lower. It’s a lilac colored bush that the women of El Wayku wear as part of their celebratory clothing.
In festive garb
Aug. 27 is the most important day of them all. On that day, more than 3,000 indigenous people from different communities along the river Huallaga, Altomayo, and Bajo Huallaga. Everyone comes to the spacious plaza of el Wayku dressed in festive clothing, as Werlin Guerra Amaringo, the 24-year-old mayor of el Wayku told us.
The procession in honor of the saint takes place until Aug. 29 The image is adorned with special clothing and is accompanied by traditional bands, dancers, and groups that visit the houses of community leaders.
The Baptism
On Aug. 30, a mass is held and the children of the town are baptized into Catholicism. The next morning, the young men go to the mountains adorned with plantain leaves to offer the dance of karachupa. The townspeople say that the young men must perform this dance on this day for 12 years in a row; if they do not, they will be cursed.
The “test marriages”
On Aug. 31, the last day of the celebration, the town is in a frenzy. In the afternoon they perform a ritual sacrifice of a duck, a bloody ceremony accompanied by dancing. Then, the young men of El Wayku “kidnap” the marriageable maidens of the village, for a “test marriage,” which the young couple will have to fulfill the next year if they still want to go through with it.
By Peruska Chambi Echegaray for El Comercio
Translated and adapted by Rachel Chase
http://www.peruthisweek.com/blogs-santa-rosa-raymi-100809
Posted by Scott Doherty at 4:14 PM