...And Then we were Poisoned

Joe was the first one awake at 2:30 with sharp stomach pains and then shortly after he was running through the pitch black jungle to find relief.  Miguel followed an hour later and then it hit me an hour after Miguel.  We were all extremely sick with a high fever, diarrhea, and sharp stomach pains.  We were up all night in pain and begged for daylight to come.  We got food poisoning from the bad meat we ate.  Everyone who ate at Wilder's house last night was sick.  Flashlights were seen throughout the village all night.  We struggled through the night and when daylight finally came we were exhausted and still very sick.  I had brought some antibiotics in my first aid kit and we took one right away. 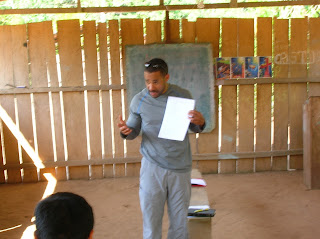 Joe was feeling good enough to teach a few lessons but Miguel an I could not leave our beds.  The teachings went very well again and they asked good questions.  They asked if it was alright to have two wives and if not, should they divorce one wife and keep the other.  They asked if they could drink alcohol and other similar questions.
We were in very rough shape and we had to walk out the 12 miles today to make it home.  We had no choice.  It took all our strength to pack up our camp and even when we stood up we were light headed and dizzy.  We had not slept, ate, or drank anything.  We knew that it was impossible to walk 12 miles through the jungle in our condition but we could only try and depend on God.  We prayed and begged for the Lord to give us His strength.  We started the painful hike out at 12:30 in the heat of the day.  Wilder's 15 year old kid was our guide.  He carried one of our big packs and Miguel, Joe, and I took turns packing out the other.  The first hour was uphill and it was brutal.  We were so weak and dehydrated.
No strength of our own remained and we prayed for strength.  As I went down the trail I thought of Psalms that I had memorized and as I meditated on these, I felt my body strengthened to walk another mile.

Our guide, the 15 year old kid, was always way ahead of us and out of sight.  We had no idea where he was but he apparently knew where we were at all times.  At times, the trail split and we had to make a decision.  To a jungle man it is common sense what trail to take.  He may see a leaf turned over or some other vague sign and know which trail is correct.  We on the other hand, are not jungle men and there are not tracks so it is hard to tell.  We guessed correct each time and found him waiting.  If we would have taken the wrong trail, we would have never got out alive.  We made the hike out in 4 hours, only on the Lord's strength.  We stumbled into Mayapo in rough shape.  I still could not eat anything, we were overheated and dehydrated.  A sister in Christ in the village took us in and took care of us.  Glory to God for the body of Christ.  The little kids did not know what to think of us and were very curious.  We crashed at 7 pm.

They had a generator in the village so they blared loud, annoying music until late and then the roosters started up at about 4 am.  Not much sleep again.  In the morning I still couldn't eat.  We heard a whistle blow and the lady told us the boats were coming up river.  We ran through the village to the shore so that we could flag down the cargo boats coming up river and hitch a ride.  Before we got in the boat, the vice president of the village took it upon himself to try to bribe us 100 soles but we wouldn't pay him.  We took the cargo boat five hours upriver to Puerto Ocupa and then hired a taxi to take us the last 2 hours by dirt road to Satipo.

Every Peruvian has home remedies for anything that ales you.  I don't know if any of them work but they do what they have to.  Miguel and his wife insisted we eat a special soup to help our stomachs.  Joe ate his fast but I could not get much down.  I looked over at their son's bowl and saw chicken feet.  Now I suppose there is nothing wrong with a chicken foot in your soup, and I have certainly ate much worse, but while a person is still suffering from food poisoning, it does not help the appetite.  We finally arrived at the hotel, showered, changed, and got something cold to drink.  We returned to Miguel's to work out some logistics for the December trip and Miguel informed us of his evening church service and asked if one of us could teach.  This is so common in Peru so you have to be prepared to preach at the drop of a hat.  I taught at the church that night and finally at about 10 pm we crashed in exhaustion.  Another day of travel found us back in the mountain town of Jauja where we preached at a church for 2 days.  On Saturday we made it back to Cusco and we were glad to be home.

Though this trip was difficult, my burden for reaching these people with the gospel has risen to new heights.  I'm so burdened to train these simple people so they can teach others even deeper in the jungle.  I will write a blog about this burden and need of missions in Peru in the next few days.  Also, I should have a video posted of this trip soon.
Posted by Scott Doherty at 8:03 AM

Hi! you passed close to my town ! maybe one day you would stop by and say hi to the Ninahuanca Family. we will love a visit

We were thinking of making a stop in Huancayo one of these trips. We would love to stop in when we do.