After being gone for almost two weeks, it is good to be home.  Our trip to the jungle working with the Ashaninca people was filled with joy and frustration.  It did not take many photos or video this trip, so I apologize.  The next series of blog posts will basically be directly from my journal.  I did take one video of the Ashaninca kids climbing trees, which is incredible.  They can climb a 40 foot tree, with few limbs, to get fruit with ease and they have no fear.  This first blog post will cover our trip from Cuzco to the village Chembo.
May 23, 2013 Thursday
Through the Gospel Coalition I got 40 R.C. Sproul books for free.  I had them shipped to my friend Matt in Montana and he shipped 8 of them to me in Cusco.  I wanted to give them out to the pastors that we work with on this trip.  They did not arrive yet and it was almost time to leave.  On Wednesday I finally got a notice in our P.O. Box that I had a package stuck in customs.  Customs opens at 8, in theory, so I had to go to the Post Office before I hopped on the plane to Lima.  After waiting for an hour I told the security guy that I had to catch a flight and asked for a favor.  He got me in, I signed all the papers, paid 10 soles and was off to the airport.  I received the books only less than two hours before are plane left.
We made all our flights with no problems and the pastor of the church in Sausa picked us up at the small airport in Jauja.  As we got off the plane there was a truck load of Peruvian soldiers.  They saw Joe and his big beard and started mocking him by calling out that he was Osama Bin Laden.  Throughout the trip many people thought the Joe was from the Middle East.  I preached at the church in Sausa in the evening to a good little congregation.  We found out that Scott Dollar missed his plane and was uncertain about his luggage.  He was still hoping to make it to Jauja tomorrow.
May 24th, 2013 Friday
As I waited for Scott Dollar and his translator Adin to arrive at the little airport in Jauja, I got a call from Tim saying that Scott missed his flight to Jauja and they lost his luggage.  He will wait another day and then fly to Jauja tomorrow and then drive the 5 hours to Satipo, where we will meet up.  Upon hearing this news we went in search for a car that we could hire to bring us to Satipo.  We will have to make the trip in 3 legs.  In the 5 hour trip to Satipo we drop around 9000 feet in elevation.  Jauja sits at about 10,500 feet and Satipo is around 1,500 feet. The first leg was from Jauja to Tarma.  We found a car and negotiated a price.  We left the high mountains and tree-less plateaus and began to descend.  At Tarma we hired another car to take us to La Merced, which is high jungle.  As we descended we felt the heat and humidity increasing each hour.  I love dropping from the mountains to the jungle because it seems as if you are entering a new world.  The cold mountain climate and  mountain culture of the Quechua people is left behind and is replaced with heat, humidity, and the people of the jungle.  The clothing is different, the food changes from potatoes to fruit stands and coffee, and even the music on the radio changes to accommodate the different culture.  This time of year the people are drying coffee beans out in the sun on huge tarps along the road.  They sell the beans to coffee companies like Star Bucks in the States.  The last leg of the trip from La Merced to Satipo was a little more than two hours.  We arrived and met Miguel, the pastor we work with in Satipo. 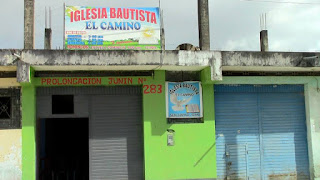 After a tour of his new location for the church, he broke the bad news to us.  We have to wear a tie for his church service.  The reasons that he gave us stemmed from legalistic Pentecostals that were pressuring him and spreading rumors about us.  Instead of arguing at this point we went and bought ties so that we would not cause others to stumble.  We would teach on this later.  We all sure looked goofy.  I was wearing running shoes, Carhartt pants, a goofy shirt that is not meant for a tie, and the cheap tie that I bought.  Tim and Joe looked equally goofy.  I preached the evening service and it was very frustrating.  Miguel was answering his cell phone during the service and then he unloaded giant speakers right next to the pulpit when I was preaching.  There were so many distractions that the people never heard much of what I was saying.  To top it off, Miguel apologized to the people for my bad Spanish and promised that tomorrow a Peruvian would be translating for Scott Dollar.  I left so frustrated because I put so much effort into the sermon, I did not have to look at my notes too much and I preached it as good as I could, at least at this point in my Spanish ability.  The language is still a hindrance for us.
May 25th, 2013 Saturday 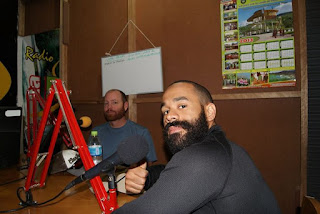 We found Miguel at the hostel when we awoke and he took us to a radio station.  He has a radio program twice a week.  He literally put us on the spot and had us speak live on the radio.  A little notice ahead of time would of helped but this is the way of Peru.  Scott and Adin arrived at noon and we had a big lunch at Miguel's house.  We had to go to the town center to find clothes for Scott to buy, as he had only what he was wearing.   It was amazing we found stuff in his size.  Scott preached the evening service to a good crowed and the sermon was very good.
May 26th, 2013 Sunday 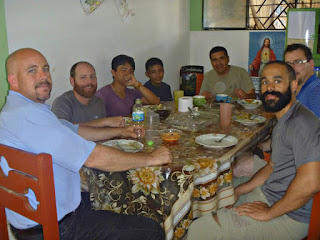 We arrived to the church service at 9:00am but no one showed up until 10:00am and then it was only 5 people besides us.  Scott Dollar preached a great message but sadly only to a few people.  After the service we had a big lunch at Miguel's house.  Miguel's wife taught us to make cerviche.  In an attempt to conquer his fears, Killillay wanted to eat a fish eyeball from the fish head soup.  He ate it but then puked it back into the soup and then he picked it up again and ate it.  Quite gross.  Later that night we went to visit an American lady that was living out of town.  There are no Americans in this part of Peru so Miguel thought we would want to visit her.  She turned out to be the sister of a friend of ours in Cusco.  Small world.
May 27th, 2013, Monday 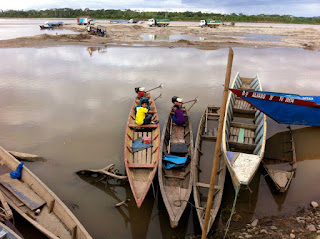 The shark picked us up at 6:00am to take us the 8 hours to Atalaya.  The shark is really just a Toyota that they call a shark because on the trip to Atalaya we have to drive through rivers.  This time of year the rivers are low but when we were on this trip last December during the rainy season, they earned their name.  Scott Dollar and Tim rode in the back and the rest of us were up front.  A long 7 1/2 hours of driving through the jungle on a dirt road and we were in Atalaya.  We waited for the guys at the village to come and get us in the boats.  There was a misunderstanding.  They guys in the village thought we were arriving the next day so according to them we were a day early.  They only had one small canoe so we had to pay a guy to take Miguel and our gear up river to Chembo. 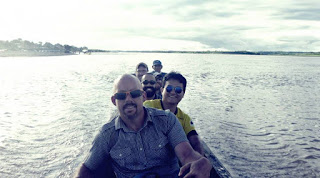 We were definitely at the weight limit of this boat.  We motored over an hour up river until we ran out of gas at dark.  Our driver pulled off to the side of the channel and refilled.  We started off again but just before the village we ran into a fishing net that got wound around the propeller of the motor.  It was dark now and we had to wade through the water and mud to the shore and then walk the rest of the way to the village.  We waited by the river until the jefe was informed that we were there.  After we received permission, we entered the village and dropped off our stuff.  The Ashaninca are very hospitable and they quickly sat us down for a late dinner of monkey soup.  It was actually pretty got except that I had a foot, which harder to eat.  We were more prepared this year and brought tents, of course with the exception of Scott who lost his luggage and had nothing.  I drifted off to sleep after a long day as I listened to the sounds of the jungle.
Posted by Scott Doherty at 10:40 AM

Thank you brother for this update. I keep you in my prayers everyday. One shirt and a tie in your luggage do not take to much space, include from now on. We will have then time to teach them about the true nature of holiness.

You are correct brother about the tie but ties are not part of the culture in the jungle. We taught and now they understand better