Jungle Journal - Chembo and back to Cusco

After a decent night sleep we met for breakfast.  We ate Sajino (wild pig) and then I showed Wilder how to set snares.  Wilder is the man we nicknamed Panther killer.  I had a friend bring me some snares from the States so I rigged a few up and showed Wilder how to make sets for puma, panthers and tigers.  I seemed to like it a lot and said he would try it out by his village, which is very remote.  Wilder's village is another 3 hours by boat and a 20K (about 12 1/2 miles) hike up three mountains.  Wilder is the jefe of the village of about 80 people.  He is the most sold out for Christ out of all the pastors and he is begging us to come to his village in September.  Scott Dollar started to teach at 9:30am on the qualifications of a pastor.  We quit about noon and ate some more wild pig for lunch.  After lunch some little kid asked me if I wanted some kind of fruit.  I accepted and he darted up a tree about 35 feet and got the fruit, broke it open and gave it to me.  It was great.  Later Adin and I watched this boy and his sister climb trees like monkeys.  They are unbelievable climbers and have no fear.  The video of them climbing is below.


The kid was funny.  He found a bee hive and said that he could wiggle the honey out of it.  His method was to hit it hard with a stick and then run 5 feet away and wait for the bees to settle.  We went back to teaching and there was a long discussion about us being there.  The cultic Pentecostal church, God is love, came into Chembo a week before us and spread slander and rumors about us.  They said that we where heretics and teaching false doctrine because we never wore ties and we had beards.  It is so sad to see what the people of Chembo have been taught. They are enslaved in legalism and heresy.  We asked Ricardo what the Pentecostal church taught him and the first thing he said was that they were taught that a Christian must wear a tie.  This is bizarre because a tie and dress clothes are so contrary to the culture in the jungle.  This is a great example of how not to do missions. They threatened Chembo not to work with us or Miguel.  Ricardo then explained to us that this was our last trip and we would not be invited back.  Scott continued teaching and expressed his love for the people in Chembo and that our pure desire was to teach the bible, nothing more or less.

At dinner we heard that Eleazar, a pastor on the Urabamba river, did not show up for the teaching because 70 terrorists with guns took over his village and they would not let anyone go.  His village was about 8 hours by boat.  The terrorists are the remnant of the Shinning Path terrorist group but do not have a political cause anymore.  They are now hired by the narcotrafficers for protection.  They are more or less mercenaries now.  They often go into these villages to steal their animals and food as well as their teenagers for their military.  I asked one of the leaders of the village if the terrorists ever came to Chembo and he said they have not.  I asked why and he gave me a great answer.  He said that God protects them and God does not want them in Chembo. 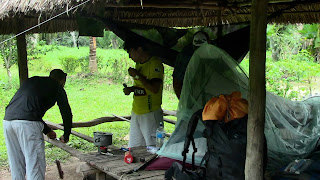 The next morning Eleazar showed up and said the terrorists were not in his village but in a different one.  He said his people just did not want to come here the word of God.  We heard several other rumors about the location of the terrorists.  The closest was a village called Mayopa, 2 hours away.  We don't really know where they were but we know they were somewhere by us.  Joe Martinez preached on the work of the Spirit in the church service in the evening.  After, we hit the sack with the cockroaches, bats and tarantulas that lived in the roof of our hut.

This morning we made coffee just after sun-up.  At breakfast we spoke with the jefe, who is not a Christian.  He invited us to us the community center to preach and said that many people wanted to hear us but would not go to the church.  Probably because the heretical legalism.  I gave him a R.C. Sproul book and he seemed happy.  We also got an invitation to preach to around 60 kids at the village school the next morning.  The principle of the school came to the teachings and had a lot of questions for Scott.  He was taught by the Pentecostals that he could lose his salvation. He was heavily burdened and said it was so hard to maintain his salvation.  We taught him verse by verse through the Bible to show that he could not lose his salvation.  He understood and was filled with joy.  He said that the Spirit in him testified to him that he was eternally secure and that the Spirit testified to him that what we were teaching was true.  A weight was lifted and he has great joy and peace.    After the teaching, Adin and I played soccer with the village kids.  It was so hot and humid but fun.  The kids are very good.  After dinner Joe and Adin caught one of the tarantulas that lives in our roof.  They put it in a plastic jug with a rock on the top and left in by our tents all night.  Tim preached in the community center to a full house in the evening.

We had the opportunity to preach in the open air to all the students at the school in the morning.  The principle showed us the 10 bibles that he had for the 60 kids.  The Catholics offered to send people to teach the Bible class but he refused and told them he wanted someone who would teach truth.  Joe, Tim and I switched off sharing the gospel.  Miguel summed things up.  After this we returned to the chapel so Scott could continue teaching.  I preached at the community center in the evening.  They killed two bats in the building during the service.  One right by me as I preached.  I don't think the sermon went well because of the language barrier and because things have to be explained in a way they can understand.  Most of them can't even repeat back a simple truth but they can understand deep things in their own way.  As we learn the culture, which is far different than Cuzco or any other place out of the jungle, we can make the connection and teach them truth in a way they can understand.  We learned a lot this trip about teaching them. 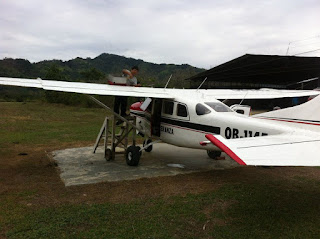 We were up at 5am and packed up in the dark.  We were supposed to leave at 6am but only one guy showed up, the other did not arrive until 6:45am.  We went down river by boat for about 45 minutes, which is faster because the current is helping us.  We got to the little airport at 8am and it was closed and the pilot was not there.  He finally showed up at 11:30 and we left at 12:30.  We maxed out the weight of the little 6 person plane.  We arrived in Satipo, found a car to take us to Jauja and we were off.  To save money we put four of us in back.  We were so squished for the 5 hour trip.  Our legs kept falling asleep and we had to switch positions to make the other leg fall asleep.  About one hour before Jauja, the taxi hit a big rock and blew a tire.  It was dark and we were stranded.  We sent Adin back to the nearest town to find another car.  We finally got to Jauja at 8pm and we were all frozen.  Going from low jungle with heat and humidity to 10,500 feet of dry mountain air and about 40 degrees.

The rest of the time in Jauja, Scott did some baptisms for the church in Sausa as well as the Lord's Supper with the church in the evening.  In Jauja I was told a sad story.  Scott and Adin know a 22 year old girl that they have been helping.  This girl's parents were both killed in a car wreck a few years ago when they were going to the hospital to have their 10th child.  This 22 year old girl became the caretaker of her 8 siblings.  Kind of hard to raise 8 kids and have a job to work and support them all.  She finds work where she can and spends a lot of time in the fields.  Sadly, the wicked people in Jauja took advantage of this situation and lured one of the sisters into a bar, drugged her, raped her and she got pregnant.  She had the baby and added another member of the family.  Scott Dollar's church, The Way, has helped her in many ways and they are currently trying to buy her a hamburger stand so she can sell food on the street.

We had another great trip and learned a lot.  We may be going into Wilders village in September to teach the 80 people for a few days.  Please pray for these people and this work in the jungle.

Great posts, sounds like a very blessed time. May the Lord open the doors for you guys to continue ministering in the area there. Blessings!

Awesome post! Very encouraged to find you here! My name is Micah Tuttle, missionary in Tarapoto. Keep preaching the truth!