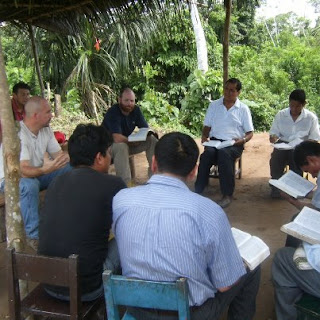 We followed the lady to where they were holding our friend.  It turned out that Raul was bird watching 5 Kilometers from the village when a group of women saw him.  They got scared and ran back to the village to tell the men.  The men responded promptly and surrounded Raul with guns and he was brought into custody.

The reasons that they were so afraid were bazaar.

First of all because the Shining Path terrorist group is near this area and they are afraid of them and are very protective of their people.

Second of all their are also organ traffickers in the area and they have killed their people to steal their organs to sell on the black market.

Thirdly because their was an old wives tale that Gringos come to slice open their children and take their grease.  This was a bazaar one and I have no idea of where it started but the people were so scared that women hid their children for 2 days when we were in the village.

Fourthly because someone heard a crazy Pentacostal preacher once say that in the United States they were administering microchips into people which was the mark of the beast told in Revelation.  Many of the professing believers in the village really though that our purpose for coming into the village was to give them the mark of the beast.  This was the first question they asked when we got there. 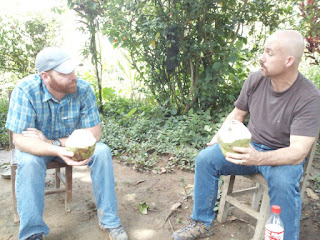 So Raul is sitting on a bench when we arrived and Adin did all the talking.  A large group of angry and scared people surrouned us and began to express their trouble and the predicament that we were in.  Adin was a swift talker and handled the situation perfectly.  They express that we are not to go more than 100 meters from the main hut we were using and that pictures or video were not allowed.  Woops!  That one got lost in translation somewhere.  Both Jack and I had video cameras with us at the moment but they were hidden.  Adin talked and talked to calm their nerves and convince them that we meant no harm.  We had permission to come to the village through Migual so the boss of the village knew we were here, which was the only reason we were not killed.   A big group now warned us that if we were found more than 100 meters from camp that we would be shot on sight.  They told Adin to tell the gringos this because they wanted us to understand this very clearly.  Adin translated it to us and they had a look of satisfaction and kind of a "try me" look.  We took Raul and walked back to the hut with the Christians.  The people followed.  One little girl had a monkey on her head the whole time, which was a little distracting.  This would have been a bad time to take a picture.

We never saw any monkeys because the people shoot them for meat and then the little kids get the baby monkeys and carry them on their head.  The baby monkey thinks that their hair is it's mom. 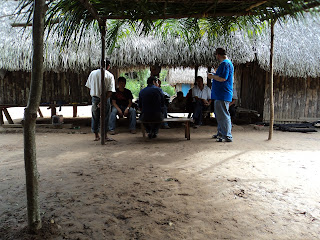 We took it easy back at the eating hut until after dinner.  Obviously we did not want to test the 100 meter warning because their is no doubt we would be dead.  They told us that without permission from the Jefe, we could not have entered the village and most likely would have been killed.  The told us there is no Peruvian law in these indigenous zones but only their own law.  They have killed people before.

After dinner we walked in the dark to the little church hut.  They prayed fervently for a half hour and then sung a few songs.  I had the opportunity to speak this night.  I shared my testimony and then the gospel, calling for repentance and faith.  This was my first time preaching in Spanish and I thought it was a great place to do it.  I feel my Spanish went smooth and easy, although I know that I made a few mistakes.  Around 70-80 showed up I would guess.

Scott Dollar got up next and preached an outstanding message on the doctrine of regeneration from John 3.  It was a little distracting trying to worship with giant spiders on the walls right next to us but we managed.

We hit the sack in our "beds" early this night and dealt with the same spiders, cockroaches, bats and now shouting villagers that were in the direction of our incident.  Jack was worried that the villagers would kill us so he asked Adin if they were serious or just messing with us.  Jack was hoping for latter as a sign of comfort but Adin said that they were angry and could try something.  This did not help Jack.  Throughout the trip whenever Jack was freaking out he started talking in the 3rd person and this time, like several times before he said, "Jack is not coming back to the jungle."

It started raining at 4am and it was so hard.  Jack called it a monsoon.  It rained hard until day break where it let up only a little.  The village was now flooded.  We were scheduled to leave at 6am so I walked in foot deep water to the gathering hut and found everyone asleep.  I asked if we were leaving and they looked at me funny, like I asked a strange question.  Apparently everyone knows that when it is raining they don't go on the river.  They said their pants would get wet.  This saying became a joke for us for the next several hours.  It was now a waiting game.  I brewed up some coffee with my stove and it sure hit the spot.  Adin finally convinced them to let us leave and we piled in the old wooden boats.

I had rain gear so I road up front.  On the way down the river I had a little shock.  One of the big spiders must have been in the boat and it crawled up my back and peaked over the brim of my hat, trying to get shelter in my rain coat.  I knocked it off but never saw where it landed so I spent the rest of the boat ride wondering where it was.

We got to shore, ate lunch and where off in the truck again for a long ride on bad roads.  This time it was worse.  We came to the first major river crossing and because of the heavy rains, the rivers where 10 times bigger than when we crossed a few days before.  Trucks where lined up and had been waiting to cross all night since 1 am.  We waited an hour and a half and then a crazy guy attempted to cross from the other side.  I would have never attempted this.  It would be like trying to drive a truck across the Big Hole river (for those of you in Montana).  The water was measured by a a kid and found to be over 4 feet deep.  The truck started across despite many warnings and as he entered the water went over his hood.  He somehow managed to make it across which encouraged another guy to follow.  He made it too so our guy was next.  I rode in the back in case I needed to make a quick escape.  We somehow made it and were off.

A black truck passed us but when we came to the next river crossing, the black truck was stopped because he was scared to cross.  Our drive pulled up to him and asked him why he wanted to go first if he was such a chicken.  Our guy plowed into the river and we once again somehow made it across.  The black truck followed and was made that he was called a chicken so he started tailgating us and honking his horn.  Our driver would not let him pass because he said chickens shouldn't be first.  We now raced through the muddy, dangerous, jungle roads at top speed, almost hitting other cars, motorbikes and people.  He would not listen to our warnings so after 2 hours of this we said we need to go the bathroom.  It worked, he stopped, the black truck past us and the rest of the trip was the usual hair raising ride.
After 6 more hours we got to the river crossing.  This one would be like crossing the Mississippi so there was a "barge" which was two wooden boats with a platform to drive the truck on.  We made it across and back to Satipo after dark.  We got a hostel with a bed, toilet seat, towels, and toilet paper, which are all options in Peru.  We had no hot water but we were to tired to care.  I must say it is quite difficult to use the bathroom with no toliet seat.

The next day we spent at the chacra (farm) of Miguel's father in law.  They made Pachamanca which was a meal they prepared by digging a hole, starting a fire, heating rocks and then filling it with potatos, yuka, chicken, pork, beans and then banana leaves.  They cover it with dirt and after an hour they dig it up.  It was outstanding.  They also gave us the best bananas in the world and the best orange in the world and many other things they grew on their place.  We talked a lot about future missions work in the jungle and about Miguel's work in Satipo.  Which I will right a separate blog about Miguel soon.  We had a church service in Satipo with Miguel and prayed over them and their new work and for the tribes on the river. 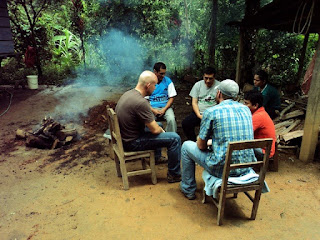 Got up early the next day and drove 5 hours to Jauja.  We saw a taxi that missed a turn and shot over a cliff into a raging river.  We were now back up at the 10,000 feet range and it felt cold to us.  Jack preached the evening service which went very well.

We hit the sack early but our hostel was hooked to a bar that blasted music until after 5am so it was hard to sleep. I left at 5am to take a flight from the little airport in Jauja. My flight was 3 1/2 hours late so I waited at the airport for 5 hours before the plane double prop plane showed up. I of course missed my flight from Lima to Cuzco and they would not help me get on another flight so I had to buy a new ticket. I got home at 3 pm.

Our trip was filled with a surprise around every corner, constant excitement, and an amazement of God.  My ipod was stolen in one of the hostels and I had to buy an extra plane ticket but I wouldn't change the trip for nothing.  We saw a hunger for the word of God, believers were encouraged, the gospel was clearly taught and preached, and the whole jungle has now been opened up to us so that we can proclaim the glorious reaches of Christ and so that His Kingdom will be advanced.

I will be writing about our future opportunities as well as posting some video very soon.
Posted by Scott Doherty at 2:20 PM

this is soooo cool! Always look forward to your updates. God is TOTALLY AWESOME !!!!

please continue to keep us posted.

in His grip,
Chris & Sheryl