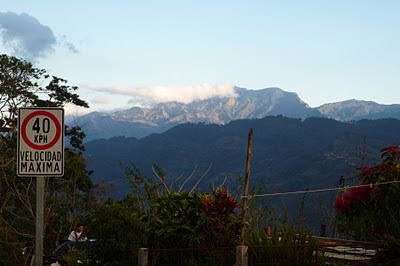 We love our new church, Iglesia Bautista Reformada, and we have been spending a lot of time with the great men of the church.  They are truly men of God that this world is not worthy of.  Yesterday, they invited us to go with them do to some evangelism in a bad part of town in San Jose and then take a ride over a mountain to meet with a small body of believers.  Joe and I took them up on their offer.
We started off by gathering a whole bunch of tracts that Pastor Alex made that deal with sexual addictions, which is a huge problem here in San Jose.  He took us to a movie theater in a very shady part of town that played only pornographic movies all day.  We watched for people entering and exiting this place and gave them these tracts.  The tracts also had a web site and contact information of the church so these people could seek out help.  The gospel was of course the center of it all.

I got to share the gospel with one man who said he was a Christian but after talking he said he would probably be in Hell.  We all gave out tracts at this place for a half and hour.   A drunk guy kept talking to me about many things so I sent him across the street to Joe so he could share the experience.  When our time was up, we jumped in the car and began our accent to the top of the mountain.

We made it in 1 1/2 hours or so.  The scenery was beautiful and when we dropped down the backside of the mountain we could no longer see the city of San Jose and it's 1.7 million people.  It was good to be in el campo again.

This small body of believers was gathered about a year and a half ago when a man found the web site of Iglesia Bautista Reformada, and started to listen to biblical preaching for the first time in his life.  He soon contacted the church and asked them to come to the mountains to teach him.  He said that if they would come to the mountains then he would gather a group of people that were hungry for truth.  He kept his word.  A faithful group of believers now gathers every Friday night under a tin roof and a dim light to listen to Pastor Alex expound the Scriptures.

We joined them in excitement and awe as we saw the work of God in a little band of God's sheep in the mountains.  It was a great experience and we look forward to meeting with this group each Friday until we move to Peru in August.  God is so good.  He is gathering His sheep into the fold from every tribe, tongue and nation.  It is glorious to see God working and to be privileged to be apart of such a great church where the men are truly pursuing hard after Christ and living a life that reflects their doctrine.
Posted by Scott Doherty at 6:59 PM