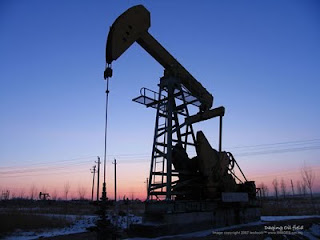 I was in Sidney, MT for a week, working with the great men at Fellowship Baptist.  I saw a literal revival being poured out.  Without being there and experiencing the presence of God, you can't begin to grasp it but I will try to put it in words.  So many things happened and there is so much detail that it makes it impossible to cover it all so I will give some highlights.

During the week, I saw God work in such a powerful and providential way that the credit and glory can only go to God because we basically just watched everything happen apart from means.  One of the first bazaar things that I found was that Jordan has a weekly radio program that plays Paul Washer clips and clips of Jordan preaching the gospel.  The odd thing is that this is on the Rock channel.  1000's of lost people in the oil field are listening to Paul Washer preach on the rock channel and then coming to church.

Unlike the rest of the churches and business in town who will not let the oil field workers park their trucks on their property, Fellowship Baptist not only allows them free parking but gives them free food, showers and they started a boarding house for the workers in the church and they use the money to send missionaries like me to the ends of the earth.  God is using this ministry to save many souls.

This week I shared the gospel in Spanish with many Mexicans that are flooding the oil field.  One night a guy named Frank, who can speak Spanish, gathered up a whole bunch of these men, some of which he lets live at his house, so that we could share the gospel with them.  Languages and bad translations were flying everywhere as we got into deep discussions about the things of God for a long time.  Conviction was very heavy on one Catholic.  Fellowship is now starting a Spanish bible study on Thursdays and God will fill it up.

We travelled many miles, which is routine for Jordan, across Montana and North Dakota to proclaim the gospel.  We went to the Mandaree Indian reservation to proclaim Christ.  I did a magic trick for a kid and told him to gather his friends, which he did and in a short time we had a small crowd.  I shared the gospel with them, which is something they never even heard before in their lives.  I had to start at the beginning with these kids because it was all foreign to them.

I saw people radically stop their entire lives and pursue after Christ with everything.  One guy who was struggling with his girl friend and falling into the wrong things with her, stopped the relationship and radically changed his whole life to pursue God.  Another guy named Daniel was burdened so much by what we had seen with all of the Mexicans that he signed up for Language school in Costa Rica for the January trimester for the purpose of learning Spanish so he can come back and start a full Spanish ministry at Fellowship.  Another girl in the church may be doing the same thing.

I saw a biblical church be built in a week.  Fellowship has been trying to start a church in Watford City, ND to reach oil field workers.  God brought in 5 families from around the country by His providence that are already discipled, reformed, like-minded on everything and solid out fro Christ.  The church will have almost 30 people in it to start and they are all so solid and want to serve and reach the oil field for Christ.  On night we met another man named Paul at a restaurant in Watford.  We were all eating and saw that his teenage girl was reading a bible so I went over to them and we started talking and soon found this was a work of God that He was revealing to us.  Paul told us about another family that was moving up here to help with a project he was working on and they also were like minded and were coming to minister to the the oil field.  All of these families that were independently brought to Watford from around the country for the purpose of serving Christ were brought together in God's time to start a biblical church.  The presence of God upon us that night in Watford was so powerful that we thought God would save everyone in the town that night.  Brandon almost stood up on a chair in the restaurant and preached the gospel.  We wanted to just run to people and proclaim the gospel to them because God was moving so powerfully.  We did grab an oil field worker in a gas station and shared the gospel with him as the whole store listened.  He almost ran out of there without hearing the good news.  I ran after him to tell him as Brandon was yelling across the store that there was good news (We only took him through the law at this point).  Everyone may have thought we were crazy but God was there and we were confident that He would save men that night.  This may sound crazy and I'm not at all charismatic but the presence of God was felt so powerfully this night that nothing in the world mattered but the Christ.

I also saw a great man transformed and get direction in a very clear way.  This guy has a very successful trucking company and he just bought his dream ranch and although he was a Christian and already serving Christ, he was becoming very discontent with his business and felt if he did not doing something for God full time, he would die.  He got such a passion for missions during the week that he made up his mind to go.  But first God revealed to him what to do with His business.  He is giving it to God.  He is going to build up his business and turn his ranch into a man camp for the oil field or use it in same was to provide income and then give all his money from his business to advance the kingdom of Christ.  He wants to start sending missionaries to the ends of the earth single-handedly and then get his pilot's licence and then go to the mission field, possible Peru, and fly around the country proclaiming Christ.  He is already going to learn Spanish.

This is only something that, until now, I have read about.  What is God doing?  What does the future hold for Sidney, Watford, and Peru?  What is God doing among the oil field workers?  I sit in awe and amazement as God advances His Kingdom and allows us to watch it happen.
Posted by Scott Doherty at 9:38 AM

It is so wonderful how God shows his glory. We will be praying for you and your family; to Sydney and Watford City folks that they may see the light of Christ.

To God be the Glory! What great things He has done, so loved He the world that He gave us His son!Praise the Lord, brothers and sisters in Christ! These are the beginning of things to come. HIStory repeats itself. LIFE is a Great Ride! It goes so fast sometimes all we can do is Hold on to God and in awe try to take in what all He is pointing out for us to see. Then when He says just a minute there is something up ahead I want to show you next and we get a moment to reflect on what we have seen and heard our hearts feel like they could burst because they are so full of joy, we hold on a little tighter knowing in ourselves that at any time we might just scream at the top of our lungs "YOU R AWESOME!!!! but we just close our eyes for a moment and with a smile enjoy the mighty rushing wind.

I am excited to hear of how God is working. God will build His church and the very gates of hell shall not prevail against God building His church! Praise God for allowing us to be used of Him in such a great way.