Reforming Peru, The Church, and The Work of God

I must say that the conference in the jungle this past week was very good, but I am so glad to be back in our church in Cusco. God is really doing a great work here. We are seeing people saved, a tremendous amount of spiritual growth within the members, triple the people in our prayer meetings, and a full building each Sunday. We were maxed out this Sunday for space. Wehrner is really improving in his preaching and has just started a series on the book of Ruth. It is so great to see the Word of God being made effectual in the brothers and sisters here. 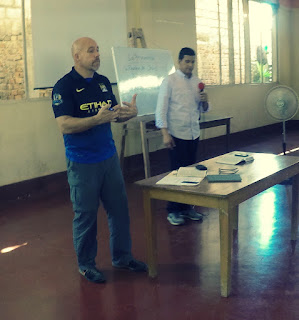 The Reforming Peru conference in Satipo went very well. There were four Ashaninka villages represented, as well as many leaders from churches in the area of Satipo. Scott Dollar taught 20 basic doctrines and Rob Aldridge from Calvary Baptist in Helena, MT taught on worship. I taught on Justification, Adoption, Sanctification, and Perseverance, as well as translated for Rob. Rebecca, Rob's wife, is a doctor. She did a mini medical campaign for two hours a day. Every person was seen and treated during the week.

It took 12 hours to arrive to Satipo by a questionable bus from Lima, and it was very hot. We taught from 9am to 5pm each day from Monday through Friday. Martin Manchego, our Peruvian friend from Lima preached on Sunday morning at Miguel's church, and did a lot of filming to make a promotional video for Reforming Peru. The video should be out in June. Our brother Walter Isse, who is a pastor in Lima, translated all week for Scott Dollar. I also brought along a brother from our church in Cusco. 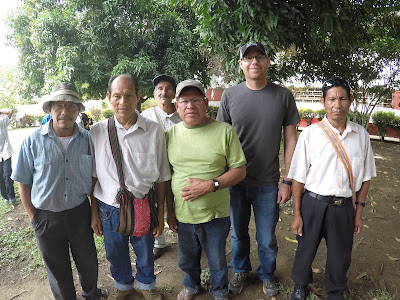 At the end of every day we had a session of questions and answers for several hours. The people came up with some very interesting questions. Through these questions and answers we learn a lot about the heretical teachings of a variety of cults that occupy this part of the jungle. For example, we discovered some crazy end times teachings. The people had a lot of questions about the end times because there is a crazy group that is traveling all over the jungle from village to village teaching about the anti-christ. They have a video identifying the anit-christ as the United States government and the Peruvian government. Apparently they teach that if the villages accept help from the government then they are accepting the mark of the beast. Sadly, many villages are signing a document that says they refuse all help from the government. Scott Dollar taught for four hours on the end times, but they seemed to be slow to grasp it. We find that we need to constantly re-teach certain doctrines every conference.

We also had some funny questions. One Ashaninka man asked if they can all bathe naked together in the river. Later we found he was asking the question because he wanted permission look at naked women. One guy introduced his question like this: "I have a hard question that I cannot find an answer to. It is very controversial and difficult." He then went on in his introduction for some time. He finally asked the question, which was: "What is the first day of the week?"

Our friend Roric, who is a pastor in Pichinaki (about 45 minutes from Satipo), preached in the plaza on Wednesday night. He did very well. We all shared the gospel after. I shared the gospel with a man who was very affected by the preaching. He said he has never heard the gospel explained like we explained it. Another guy, a homeless man named Juan, was affected and came to the conference the rest of the week. He was taken care of medically, with meals, and a bus ticket back to Lima. He said that in all his time being homeless, not one person has ever helped him or gave him anything.