We are soberly reminded that we are not in the United States nor even in Costa Rica anymore when we see two helicopters flying over our heads, which were coming from fighting terrorists in the jungle.  Peru only as 17 helicopters in their fleet and the terrorists are hard to find in the jungle so it is a slow, uphill battle.
On Saturday we decided to take a trip to Curahuasi, which is about 3 hours from Cusco, to visit some people we know and the church in Curahuasi.  Again, we drove for 3 hours and passed many people and towns and there are no churches anywhere and no work going on anywhere.   We arrived at Walter Gamarra's house in time for cafecito.  We watched an amazing sunset behind some massive snow capped peaks and ate palta.  Palta is avocado and in Curahuasi it grows the size of cantaloupe.  After we ate we met a friend of Walter Isse's at the German hospital and he showed us around.  The German's are doing a great work in Curahuasi.  They built a hospital that rivals any hospital in the States, which they basically give free medical care to the mostly Quechua population.  They also built a childrens hospital and they are going to built a big school in the town that will educate 500 students.

The next morning we went to church.  The church is growing very fast and they now have 2 separate services, a Sunday school and main service in Spanish and then later in Quechua.  They have about 150 people attending on a regular bases and they drew up plans to build a new church building, which they need very bad.  Our friend from Lima, Peru - Walter Isse, who we used to help us interpret, was invited to preach and he preached an outstanding sermon.
We heard the day before that the President of Peru, Ollanta Humala, was going to be in town at the plaza at about 11:00, which was just when church finished.  It was quite an odd thing that we found ourselves in a middle of nowhere town of 5000 people and the president was coming for some political campaign.  We first heard the helicopters during church and we knew he had arrived.  We walked to the plaza and just about the whole town was there. 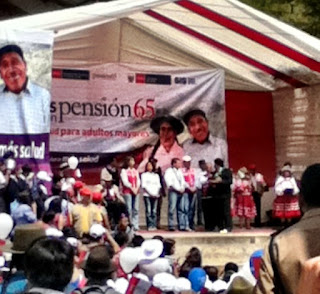 The president gave an animated speech about some new socialized health care plan (you guys in the States can relate) and then he walked through a crowed of people, jumped in his helicopter and took off.  When he was walking through the crowd of people our friends Walter Isse and Wehrner both shook his hand and greeted him.  It was a very strange situation.  I have never seen the president of the United States and now I found myself in a remote part of Peru with the president.

After we said our goodbyes to Walter Gamarra, we loaded up in the small car for the 3 hour trip back to Cusco.  As we made our way over the long pass back into Cusco, our hearts were again burdened with the immense need for the gospel to be preached all over this country.

We spent the last day looking at apartments for our families.  Our good friends, a group of medical missionaries in Cusco, helped us out tremendously on this trip and are going to be a great help for us when we begin to get settled.  They gave us so much invaluable information that they learned through many trials.  We praise God that He has put them in our lives and the God is already paving the way for us in Cusco and preparing the soil for the kingdom of Christ to be advanced. 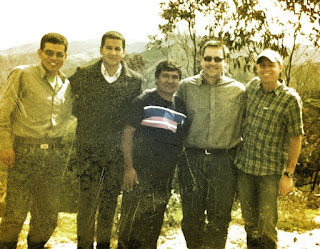 Posted by Scott Doherty at 1:00 PM

liked the part where both of your friends shoot the president's hand. We could never get away with that here in the US.