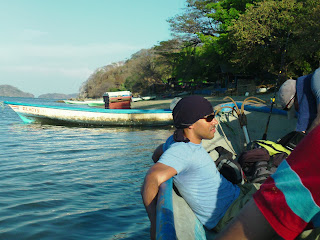 I woke at 3:30am to my alarm.  It was time for the fishing trip that a few of us were invited to go on with a few guys from our church.   We met everyone at the church and drove for a couple hours to the ocean.

We drove down a little dirt road and stopped at the shack of a local man who is a 3rd generation fisherman.  We hauled our gear to the shore of the Golfo de Nicoya and saw several big row boats with a motor.  One of these boats would turn out to be our vessel.  It was time to launch so all 11 of us jumped in the little boat and we were off.
We soon stopped and they pulled out some spools with fishing line and a hook on them.  We baited them with shrimp and dropped the over the side.  We started catching a variety of fish, including the dreaded puff fish that was a very strange beast.  It had teeth that looked like human teeth and when you got it into the boat it would start inhaling air rapidly and blow itself up like a balloon.

After an hour we motored across the gulf and pulled to shore.  It was very interesting on shore.  We were amongst local fisherman and it seemed that many fisherman build a small house or shack where they wanted and lived and fished everyday to make a living, which is not easy.  There were whole villages of these little fishing families.  I thought it was great to be here.  We were far from any tourist areas.
My favorite part of the trip came next.  At lunch they grilled up a whole bunch of meat but as they were preparing it, I sat down with the captain of our vessel and we began to talk.  I eventually turned the conversation to the spiritual and found out that this man, who has only fished his whole life, was not a Christian.  This was not a surprise but I found out that his wife was a Jehovah Witness and others in his family went to a Charismatic church by their home.  He had many issues with the church, and I can see why from what he was exposed to.  He was very open and interested to talk about the gospel.  My friend Joe and I explained the gospel to him for about an hour.  This was our fishing trip all along.  We were to be fishers of men, not fish.

We ran out of gas so the captain pulled into a little fishing village to buy some.  As we motored past all these fisherman I wondered if the gospel has ever been brought to these people. 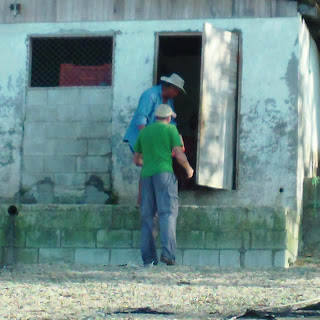 On the way back the wind came up from the North and we motored slowly over the big waves.  The seasoned captain was not phased at all.  This trip across the gulf in the waves seemed similar to the disciples crossing the sea of Galilee in a storm.  We made it with no problems.  The fishermen that were our guides invited us to eat dinner with their families.  We took them up and had fish, of course, for dinner.  They were so hospitable and kind to us.  We were humbled by the great opportunity that God gave us this day.
Posted by Scott Doherty at 6:31 PM

Thank you Scott, that was encouraging, and an example to me that we must to get the most of every opportunity to preach the gospel.

I saw a comment of yours on another blog and decided to check out your blog. I really appreciate your subject line after the title of your blog and then found this post very encouraging. Thank you.

Thanks Eric, I appreciate the feedback. Press on brother.