Spanish and Thanksgiving in Costa Rica 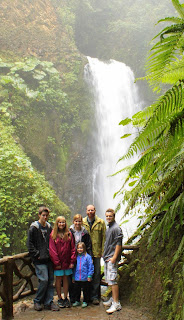 As learning Spanish goes, it seems like you have very good weeks where things are flowing and other weeks where you wonder what language the guy speaking to you is using.  Today was one of the good days.  Kim and I were coming home from the store in a taxi and I got in my first debate in Spanish.  The guy was asking about what we are doing here in Costa Rica and what we would be doing as missionaries in Peru.  I told him and then asked him if he was a Christian.  He said no but he was a Catholic.

Now you must understand that I wrote out how I take someone through the gospel in Spanish and I had the Spanish on the paper reviewed and corrected.  I can share the gospel with someone and explain sin, the law, man´s depravity, the need for a Savior, the substitutionary atonement of Jesus and faith and repentance and even explain the evidence of a true Christian.  I usually just blast people with this 10 minute, one sided, gospel presentation and then hope they don´t ask questions.

This time was different because the taxi driver was asking the questions and then debating my answers so I couldn´t just use my usual speech, I had to actually think and speak.  I have to say it went better than I thought.  I´m glad I was having a good day in Spanish and not a bad one.

He said that all the churches in Costa Rica were biblical and that Catholics, Christians, Mormons and Jehovah Witnesses were all the same and all good.  I disagreed and explained that there are huge differences in beliefs between the groups.  He showed me his Gideon bible in Spanish so I turned it to Ephesians 2:8-9 and read it to him and explained that this was one major difference between Christians and Catholics.  We talked about works based salvation and he asked what faith was.  I explained repentance and faith was the only way that he could go to heaven otherwise he would be in Hell.  He said that Hell was on this earth.  I explained what Hell was really like.  We ran out of time when we got to my house.  I was happy with the conversation and so grateful to God that He enabled me to use my bad Spanish to share the gospel with this guy and that God enabled this man to understand my bad Spanish.

Everything is going good with our family down here.  We are feeling a little guilty for living here when we look at the weather back home.  On the way back from the market in my shorts with a backpack full of fresh pineapple and other fruit I thought about Shelby being way below 0 that same day.  We take the good with the bad down here.

Costa Rican's don't celebrate Thanksgiving so all the Ticos are going crazy with Christmas.  My brother Michael would probably go postal when he saw that they started putting Christmas merchandise in stores at beginning of August.

We are getting ready for a big Thanksgiving dinner at the Killillay's on Thursday.  We are having chicken instead of turkey but we managed to find enough traditional Thanksgiving ingredients around town to have a pretty good meal.  Although it doesn't quiet seem the same since it is 75 degrees.  I miss the big Thanksgiving dinner with family and then hunting for elk in the snow and cold the next day with my dad and brothers and with a couple of turkey sandwiches in my backpack.

But Jesus is so worth missing the little things and we count it all joy give things up for Him and His glory.  We thank God for the opportunity to be His slave in the mission field.
Posted by Scott Doherty at 3:44 PM

Glad all is well. You are correct about Christmas. Thanksgiving is one of the best holidays and is shadowed by Christmas for some reason. I don't get it. I miss all of you as well, but you are correct Jesus is worth the sacrifice.